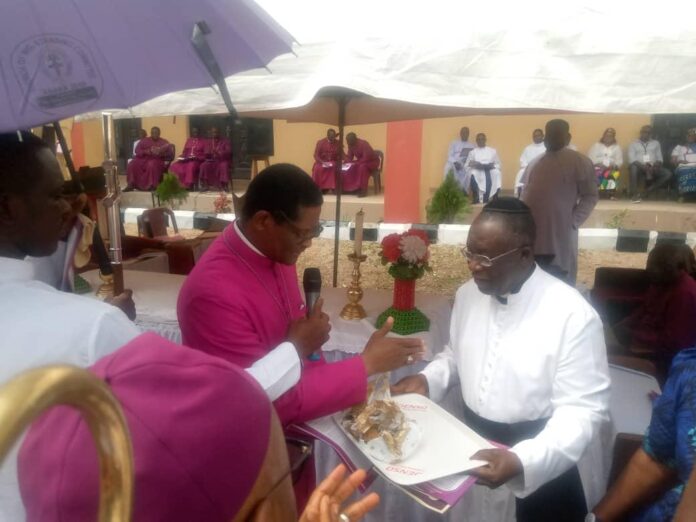 The Archbishop, Metropolitan, and Primate of the Church of Nigeria (Anglican Communion), His Grace, the Most Revd. Dr. Henry Ndukuba, has said that infant and maternal healthcare still constitute a big burden on Nigeria.

Primate Ndukuba stated this, Friday, during the official dedication of the College of Nursing Sciences, Awka, built by the Diocese of Awka, Anglican communion, Anambra State.

Delivering his homily at the occasion presided over by the Archbishop Ecclesiastical Province of the Niger and Bishop Diocese of Awka Anglican Communion, Most Reverend Alexander Chibuzo Ibezim,

the Primate decried that the country is still backward in its healthcare deliveries despite the recent innovations and developments across countries of the world.

He further decried that infant and maternal mortality rate in the country is still alarming, noting that it has become a source of worry to Nigerians.

The primate who also dedicated the Renaissance Modern Polytechnic at Mbaukwu and Archbishop Ibezim’s Law Faculty building at Paul University, Awka all built by Awka diocese, said even though some states fair better statistically, many children under the age of five years are still lost to avoidable deaths in the country.

He said despite recent enlightenments and education in the country, some obnoxious practices like the killing of children through abortions, money rituals and others still thrive in the society.

The Primate who questioned why women should still be dying recklessly in childbirth in the country, said the situation has galvanized the church to provide care in their own capacity to save people from the recklessness in the system.

He said ” because the health and minds of our children, daughters, wives and mothers are at stake, there is need for the church to rise up and do the work and ministry of God.

“Authority is given unto us not only to preach the gospel but also to heal the sick and to deliver them that are bound.”

Speaking further, the Primate said the establishment of the Millennium Nursing College in Awka is to prosper the work of Jesus Christ, who according to him, is the great physician.

He said the college is where midwives, nurses shall be nurtured and trained before being released into the health facilities to help improve the weakened healthcare system of the country.

“In our public hospitals, some of the doctors, nurses and midwives are not as experienced as their qualifications are and people that are queuing up to take over from them do not know their left from their right. They carry certificate but do not know what to do; which makes it no longer a surprise that somebody died accidentally.”

He emphasised that the church will ensure strong training of nurses and midwives in the college not only in character but also in the fear of God.

“There will be training for character. The fear of God is the beginning of wisdom; that is what our generation has lacked.

“Any nurse that do not fear God can do unimaginable. She can sell babies, she can take blood from somebody that do not even need blood and can equally abuse the woman in labour. “

See also  Anglican Primate describes Knights as great pillars of the church, charges them to participate actively in electoral process - From Chukwudi Ejimofor/PH

In his remark, the Archbishop, Province of the Niger, Most Revd Alexander Ibezim, PhD said everything in the facility is a product of sacrifice and acknowledged those that contributed in their various capacities for the success of the college.

Archbishop Ibezim, also the bishop of Awka Diocese thanked the church for standing by him to execute the projects. He also encouraged the Christian faithful to stick to their support for the church for the betterment of the society.

Wife of the Anglican Bishop of Awka and Archbishop Province of the Niger, Mrs Martha Chioma Ibezim, JP among numerous others including Archbishops, Bishops , clergymen and prominent laity atteded the event.