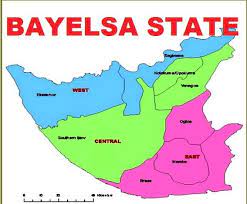 A 37-year-old security man, Anthony Egbo, has been beheaded by suspected ritualists in the premises of Living Faith Church located at Elebele Community in Ogbia Local Government Areas of Bayelsa state.

SummitNews gathered that the Assistant Pastor of the Church,discovered the mutilated corpse of the victim, with the head severed from the body while the throat was missing on Thursday in a pool of blood.

The Youth President of the Elebele Community, Mr. Famous Egbo, said the remains of the victim were discovered at about 5.50am on Thursday.

“When people saw him, he was beheaded. His throat was missing, and some people suspected that it may be a case of ritual killing,”

The youth leader said Asinim Butswat, Police Public Relations Officer (PPRO)
confirmed the incident, but explained that the report from the Divisional Police Officer (DPO) in Kolo community states that “the attack was at the head region and his throat was slit.”

In another development, an unidentified vandal was electrocuted along the Osiri area of Yenagoa,the Bayelsa  state capital.

The body of the vandal was roasted beyond recognition, and  was discovered early on Wednesday morning dangling from the electric pole.

A resident of the area, Pereko Stanley, said the vandal had cut one of the armoured cables but met his waterloo on the second one with the power coming on leading to his  electrocution.