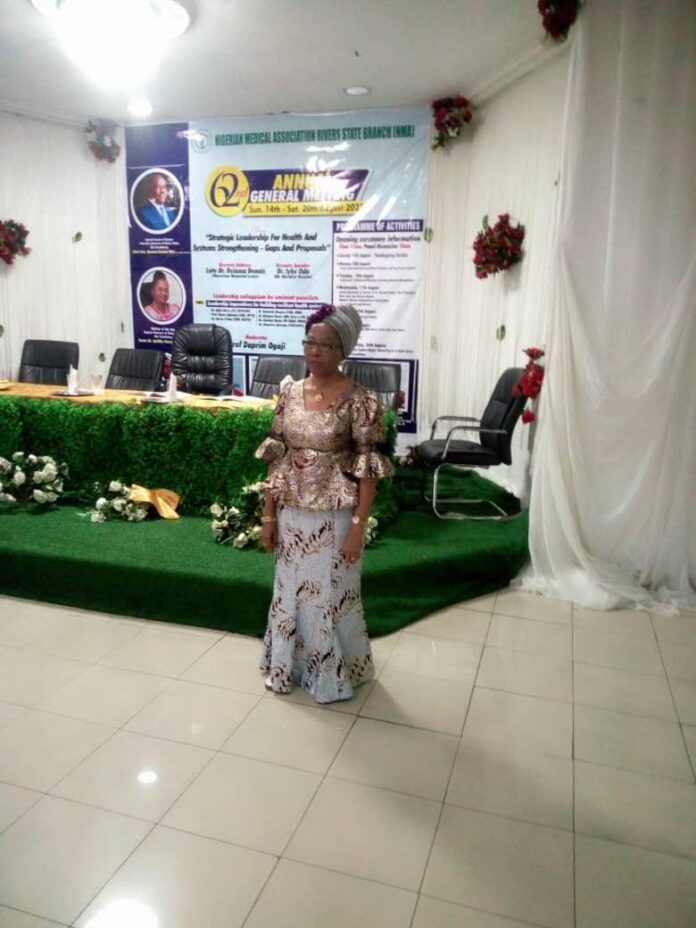 The 62nd Annual General Meeting and Scientific Conference of the Rivers State chapter of the Nigeria Medical Association (NMA),  went beyond the usual deliverance of lectures, and reeling out of achievements recorded by the association’s executive.

The meeting also provided an ample opportunity for the association to honour one of its distinguished members – Dr. Claribel Ifiesimama Abam.

Severally described as an astute administrator; a woman of integrity, a medical doctor par excellence,   Dr. Abam was recognized and celebrated by the NMA and her close friends  for her contributions towards the growth and development of humanity.

The chairman of the occasion Dame Dr. Okara, extolled Dr. Claribel Abam’s services during her tenure as the first woman Chairman NMA Rivers state branch and her service to humanity, contended that she will achieve more as the Vice President Near East and Africa of NWIA.

”Women are critical stakeholders in leadership worldwide. The land of the NMA edifice was purchased and the groundbreaking was under her as the NMA chairman in Rivers state Branch, we are proud of her. You are exceptional and exemplary past chairman of NMA Rivers state, we are indeed proud of you. The Near East and Africa will see the impact in you”

The incumbent chairman of Nigeria Medical Association Rivers Branch, Professor Chizindu Aliko, opined that the branch decided to celebrate an icon while alive because its going to increase her performance in her new field of endeavour; according to him she is goal getter and a resilient fighter.

“its good we celebrate persons while they are alive, she is a dodged fighter, in her tenure, she is going to increase the prestige of not only Rivers state Branch but the NMA as a body. For us to have International Vice President we should be exceptional for celebrating her, she is a goal getter. We are intentional about celebrating women”.

In her acceptance speech, a visibly excited Dr. Abam expressed surprise that the NMA captured her track record, and thanked the NMA Rivers State chapter for organising the event in her honour.

She promised to continue to work hard to justify the enormous confidence reposed in her by NWIA.

“Am happy to do the enormous work because at the end of my tenure, there are many people in Nigeria, particularly Rivers state branch that will be coming after me.

“I have always seen service as the only way to give back to the society,” she said.

She admonished her colleagues to endeavour to make a good mark towards the service to humanity through leadership, saying that “what matters is what you contribute to humanity at the end of the day.

’There must be something that people will remember me for, so tell yourself that I must not leave this world, without leaving sometime for which I will be remembered foe.

“You should not be a bench warmer. Always know that whatever you do in this life integrity, honesty, discipline are important. In administration sometimes you have to make tough decisions, not because of somebody, but because the system must go on.

“As a leader, you should know that people will not always agree with you, but at the end, if you are sincere, if your purpose is right, if your services are good, if you are humble and you have integrity people will see that your intention is good in the first place and you will make progress”.

The event witnessed the cutting of cake by the celebrant and lecture on leadership delivered by Professor Rosemary Ogu, President- elect Medical Women Association of Nigeria (NWAN).