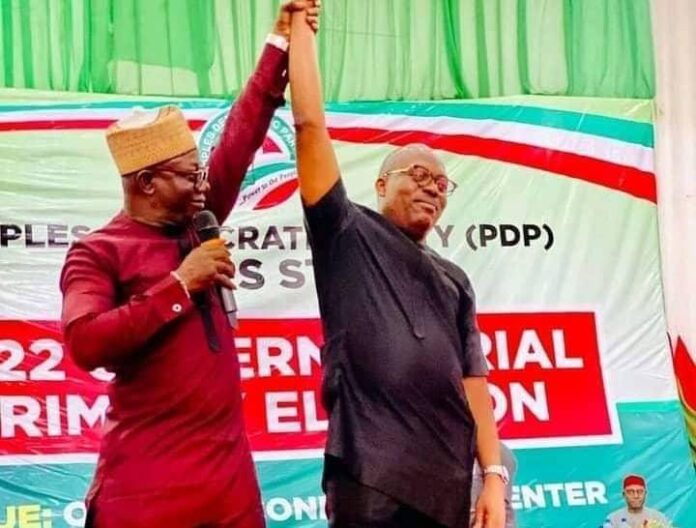 SIM Fubara (right) being introduced to the mammoth crowd

As the race to the 2023 general election gathers momentum, the governorship flag bearer of the Peoples Democratic Party (PDP) in Rivers State, Amaopu Siminilayi Fubara, has continued to receive support from different quarters across the state, as his kinsmen in Opobo Kingdom has thrown their weight behind his candidacy.

Speaking at the grand finale of the Grassroots Development Initiative (GDI) Sensitization and Collection of PVC Rally in Opobo Kingdom, some chiefs, titled citizens, opinion molders as well as other respected sons within Opobo Kingdom reiterated that the emergence of Amaopu Senibo Sim Fubara as the PDP standard bearer for 2023 governorship election in the State is a historic feat, stating that they wish to be part of the history.

Alabo Edwin Cockeye Brown, chairman of a group under the aegis of “Opobo Elder Statesmen 4 SIM” said they were at the event to sensitize the people of Opobo on the need to collect their PVCs and use them to vote for their son as the next governor of Rivers State, come 2023.

While commending the GDI for painstakingly touring the 23 local government areas of the state for the campaign, Alabo Brown, a Justice of the Peace and chief of the Brown War Canoe House of Opobo, said that the group is non-partisan but made up of men of impeccable integrity whose sole objective is to further the advancement of Opobo Kingdom.

“Electoral victory is determined by the active participation of the electorates.  This can only be achieved through conscious participation of the citizenry, not only in voters registration exercise but also in the collection of their voters cards”, he said he pledged the commitment of the entire War Canoe Houses in Opobo Kingdom to drive the initiative of ensuring that the PVCs are collected and put into productive use.

On his part, the Chairman of the Board of Opobo Elder Statesmen 4 SIM, Alabo (Dr.) Reuben Mietamuno Jaja said the massive turnout of people for the event showed the solidarity of not only the people of Opobo and Nkoro but the entire Rivers people, for the candidacy of Siminialayi Fubara.

He appealed to the people to understand the need to exercise their civic responsibility which he said, can only be exercised by collecting their PVCs.

Also speaking, Alabo Prince Charles Douglas Macpepple Jaja said as traditional rulers, they have come in their numbers for the GDI sensitization, adding that they would not chicken away from lending every support needed by their son to enable him emerges as next governor of the state.

The group’s Director of Operations, Senibo (Dr.) Donald Afanya Brown, in his contributions, stressed that they are predominated by Opobians who appreciate the PDP guber candidate, and they are working tirelessly to ensure the actualization of his dream.

He however noted that the group was careful in selecting its membership, as they do not want those who are politically exposed in their midst.

Senibo Donald Brown further disclosed that as traditional rulers, they have come in their numbers for the GDI sensitization, adding that they would not chicken away from lending every support needed by their son to enable him become the next governor of the state.

In his comments, Alabo Godwin Nengia Omoni Bupo, expressed joy that Opobo and Nkoro people have demonstrated their readiness to collect their PVCs and are merely waiting for election day to vote for their son, Amaopu Senibo Sim Fubara, adding that this is the first time in the political arrangement of the state that Opobo elders and statesmen have come in their numbers for a common cause.

Similarly, another member of the group, Alabo (Sir) Dr. Justus Clinton Captain said that in politics, opportunities come and go.

His words, “And for us the Opobians, and particularly for some of us who are Alapo Council members, though we don’t play politics because we are restricted by our constitution from playing politics