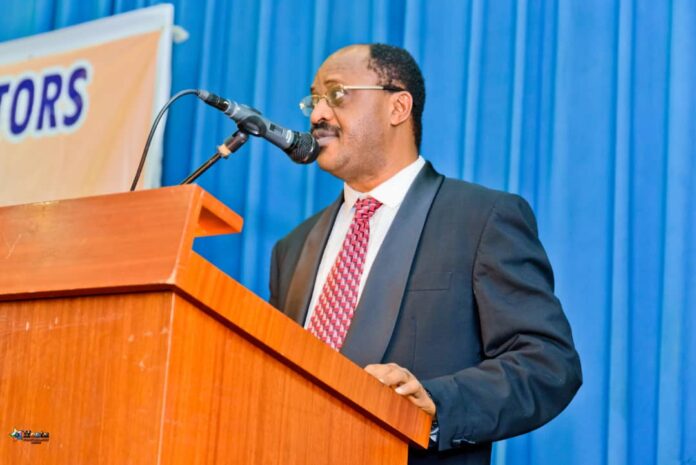 Dr John Otu, lecturer at the Alex Ekwueme Federal University, Ndufu-Alike Ikwo (A-EFUNAI), in Ebonyi has harped on the need for sustainable human and infrastructural development of Ebonyi.

Otu, one-time Commissioner for Information and State Orientation made the call in an interview with our correspondent on Thursday in Abakaliki.

The former commissioner commended the quantum leap in development arguing that the state had emerged from the ashes of underdevelopment to being reckoned among the frontline states in terms of human and infrastructural development.

He called for a deliberate plan to improve and sustain the development drive through the enthronement of credible leaders that would be both people and service-oriented.

The don noted that Ebonyi was lucky to be endowed with credible leaders as governors since its creation in 1996.

He stressed that rapid and steady progress recorded in the areas of human and infrastructural development in the state could be attributed to the devotion and commitment of these past leaders.

He explained that the policy thrusts of the leaders were centred on lifting the state and its people from poverty, illiteracy, disease and backwardness.

He commanded the incumbent governor, Chief Dave Umahi for improving and sustaining the development vision through his massive landmark infrastructures.

He nonetheless attributed the success story of Ebonyi to the foundation laid by the administration of Sen. Sam Egwu, the first civilian governor of the state.

“If you go through what Ebonyi was before Egwu came on board, you will know that Ebonyi was a sheer dessert; nothing was here, it was derisively called ‘dust’ of the nation, and there was virtually no tard road in the state.

” No pipe-borne water in the state and that accounted for the high incidences of Guinea worm and Cholera infestation in the state.

“And of course successive governments in our older states where the various parts of Ebonyi belonged marginalised us criminally so to speak so much so that the people here in Ebonyi were like urchins, they were like layabouts, they didn’t know what education meant.

“It was like the only few people you had in this place were the very few privileged class who were only given appointments by those governments and they only interested in themselves,” Otu said.

The former commissioner noted that the creation of the state by Gen. Sani Abacha in 1996 and the election of Egwu in 1999 as the pioneer governor led to the change in the sad narrative.

He said: ” Thank goodness that Ebonyi was created in 1996 and we had to look inwards and Ebonyi was also lucky to have former Gov. Sam Egwu as the first governor of the state.

“Because of his background as an intellectual and academics, he was able to know what was of primary importance to the state and so he tackled it head-on on the assumption of office.” He extolled the achievements of the Egwu administration in education; housing, road construction, job creation and empowerment.

” The masses of Ebonyi people who were once deprived benefitted from it. We could the number of graduates from the state on inception at our fingertips; our Teaching Hospital then had only two consultants and the Ministry of Health had only nine doctors.

“So, each time we think about the achievements of the state, I ask, how did Ebonyi move from the backwoods to the frontline?” he added.

Otu congratulated former governors of the state including Egwu, Chief Martin Elechi and the current state government under Umahi for sustaining the chain of development in the state and called on future leaders to expand and sustain their efforts.