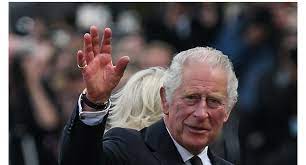 King Charles III has been proclaimed as Britain’s new monarch in a ceremony followed by gun salutes and the reading of proclamations in London, and across the four corners of the United Kingdom.

The proclamation was read publicly in the other capital cities of the UK – Edinburgh in Scotland, Belfast in Northern Ireland, and Cardiff in Wales – and at other locations.

The proclamation follows the death of of his mother Queen Elizabeth the 11 on Thursday, September 8, 2022

The Queen, the UK’s longest-reigning monarch, died peacefully at Balmoral Castle on Thursday afternoon at the age of 96

Meanwhile, senior MPs, including Prime Minister Liz Truss, have sworn a new oath of allegiance to King Charles III in a special session of Parliament.

Hoyle said “time constraints” meant only a small number of MPs could take the oath today.

Truss was among those taking the pledge, speaking the words: “I swear by almighty God, that I will be faithful and bear true allegiance to His Majesty King Charles, his heirs and successors, according to law, so help me God.”

In a rare sitting, MPs and peers are gathering for a second consecutive day of tributes to the late Queen Elizabeth II.