HomeSportsLIMCAF '22 opens with 65 arts exhibition in Enugu - From Tony...
Sports 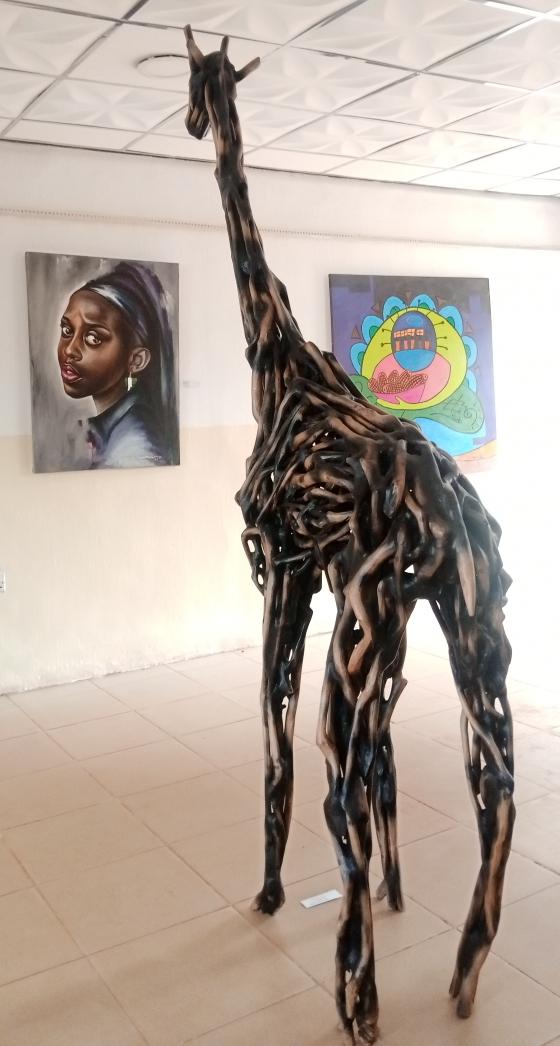 The annual Life In My City Arts Festival (LIMCAF) for 2022 Enugu Region, has been declared open by a retired Justice of the Court of Appeal, Justice Chinwe Iyizoba, who called on the rich and wealthy individuals in Enugu State to support the event by setting up an art endowment fund in honour of their loved ones.

NewsBit reports that, although the ongoing arts festival ought to be the 16th edition since its inception way back in 2007, however, it’s being regarded as the 15th edition due to the disruption caused by the Covid-19 pandemic which posed a huge health challenge globally.

Besides the ongoing Enugu Region exhibition, there are exhibitions of selected works at the other zones/centres in such places as Abuja, Zaria, Port Harcourt, Uyo/Calabar, Lagos, Ibadan, Ondo, Owerri and Benin.

Since its inception, LIMCAF has empowered and promoted not less than 1,500 young talented artists in the country.

Recall that LIMCAF was established in 2007 as an annual celebration of creativity featuring young talents in the Nigerian art landscape, and meant to be the biggest art event in Nigeria.

Right now, 65 different types of art works such as sculpture, terracotta, mixed media, paintings, charcoal drawings, photography, ceramics, oil on canvas, acrylic on canvas, fabric on card, textile, clay, etc done by young talented and enterprising Nigerian artists resident in Enugu State are on exhibition at the venue where it all started 16 years ago – the Alliance Francaise in Ogui New Layout, within the Enugu metropolis.

Effect of Domestic Violence on Children by Enoch Akabuogu

The theme of this year’s event is “Paradox of Muted Echoes.”

Declaring open the event, the special guest of honour, retired Justice Iyizoba used the opportunity to appeal to wealthy individuals to throw their weight behind the festival to encourage and empower upcoming artists so that they can develop their artistic skills and compete with their counterparts outside the country’s shores in international art competitions.

She said: “I will use this opportunity to urge all the rich and wealthy people in Enugu State to remember that this is a worthy venture. I urge you to make endowments for your name or on behalf of your loved ones.”

She said that LIMCAF has given the Enugu people a good opportunity to witness the art exhibition live and also encouraged the young artistes to exhibit their works live in Enugu.

“There are many of you here who have been to arts exhibitions and there are others who have never been to a live art exhibition. So LIMCAF has given everybody the opportunity to witness it live,” she said, adding that so far, the festival has recorded sufficient levels of feats in helping young Nigerian artists to develop and promote their skills as well as showcase the artistic potentials of young Nigerian artistes.

Earlier, a member of the LIMCAF Board, Chief Loretta Aniagolu, who represented the chairman of the Board of Trustees, LIMCAF, and a former Chairman, Union Bank, Elder K. U. Kalu, said that it would be a remarkable event for artistes in Enugu State to participate actively in showcasing their creativity during the festival.

Chief Aniagolu also said: “It’s amazing that this level of creativity exists in the young artists, despite the socio-economic and political challenges in the country.

Also speaking, the Art Director, LIMCAF, and Chief Lecturer, Institute of Management and Technology (IMT), Enugu, Dr. Ayo Adewunmi, said there are 65 entries from the Enugu region, stressing that   by organizing the event, the management of LIMCAF was preparing for the future as some of the young artistes are being celebrated internationally.

He said the theme for this year’s edition, “Paradox of Muted Echoes,” suggested that things might not always be the way they are perceived.

“It also seems to suggest that sometimes, silence being a vital part of sound, may be a potent device to enable us to hear from within, but it still presents a paradox,” said Adewunmi.

Dr. Adewunmi said: “We have been through this event for 15 years; this would have been the 16th edition but for the sudden outbreak of the Covid-19 pandemic. We are looking forward to a better event. We hope we can make Enugu a tourist destination for visual arts, and we are preparing the young artists for it.”

According to the art director, LIMCAF was established in 2007 and registered as a Trusteeship in 2012 under the name Life In My City Art Initiative as an annual celebration of creativity featuring young talents in the Nigerian art landscape.

He said LIMCAF “is the biggest youth art event in Nigeria featuring visual art competition, festival lecture, school children’s and art teachers’ workshops, as well as multimedia workshops. The Gala and Award Night is the climax of the festival in Enugu, Nigeria in October every year.”

Adewunmi recalled that for over 15 years, LIMCAF has created and sustained a platform which has empowered more than 1,500 young artistes, promoted art pan-Nigeria through the annual competition that offers young people an avenue to showcase and commercialize their productions, win handsome prizes and interact with the larger art community on a national and progressively international basis.

Explaining the selection process for the LIMCAF 2022, which he said was in three stages, he said that the stage one “is online election by the National jury of works that are suitable for Regional Exhibitions,” while stage two “is the physical exhibition of selected entries at the Regions.”

He added that at this stage two, the Local jury will take a critical look at the physical works and select the best artworks that will be part of the Top 100 for the Grand Finale Exhibition in Enugu.

He also said that the grand finale exhibition will be held between 22nd and 29th October 2022 at the International Conference Centre, IMT, Enugu.

But one of the artists, Mr. Enebeli Desmond, whose work entitled “Open Secret” (Oil on Canvas) was on display said he produced the work in order to deliver a vital message to all Nigerians home and abroad. With his brush and paintings, Enebeli was able to draw and paint the detained leader of the Indigenous People of Biafra (IPOB), Mazi Nnamdi Kanu in chains and handcuffs sandwiched in-between two stern-faced armed security men.

According to the Ukwuani, Delta State-born 2018 Applied Art graduate from the University of Nigeria, Nsukka, (UNN), “the once peaceful agitation for self-determination organized by IPOB has eventually led to pain, agony, detention and inevitable imprisonment of the leader. The subject of the work is Nnamdi Kanu.”

Another artist, Ms Mbaeri Peace, whose work entitled “Hope” (Terracotta) comprised a snail, an empty shell, and atop the shell and snail is a new born baby with face looking towards the sky, though the sex/gender is not indicated.

“I did the work to illustrate the emptiness or void and the fact that nothing seems to be working in Nigeria. Everything appears to be working sluggishly which is reflected in the snail. However, there is hope at the end of the tunnel. The new born baby shows that there is still hope of surviving in Nigeria despite all the challenges of economic recession and insecurity,” said Peace as she labored to interpret her work to the excited audience.

Yet another young artist, Enoch Uche Akabogu whose work, “Effect of Domestic Violence on Children,” (Thread on Canvas), illustrated a child in agony and lamentation following the domestic violence in which the parents were involved.

The picture shows the awe-struck child holding her head tight, with her palms covering her ears, as if the noise created by the parents’ violence could make her head to explode. “I want parents to realize the negative impact or effect of their infighting on their children. Parents should, by all means possible, avoid domestic violence,” Akabogu said.