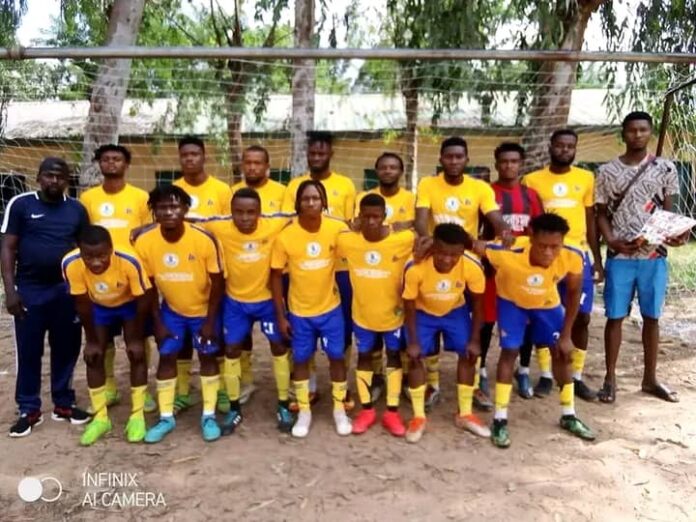 The opening ceremony was a delight to watch as dignitaries from all walks of life graced the event.

The centre referee, Engineer Donatus, blew his whistle signalling the kick off of the game at 3.32 pm Nigeria local time.

Indeed, it was not a time to talk about title contenders yet as people were thrilled by  mastery of the round leather game by the young  jugglers from the two teams.

Instantly, fans knew that the two teams were different the ones they saw during the first edition of the tournament last year when first goal sorcerer opened the flood gate of goals through a canon shot outside the 18 yard box beating the diminutive goal keeper Abraham from Enugu North Local Government Area hands-down.

The first half was a ding dong affairs until a goal mouth scramble which saw a canon shot outside 18 yard box from Aninri striker, Chukwu Ebuka, that caught the Enugu North goal keeper napping. The opening goal electrified the stadium with jubilation from the fans. Bonaventure also from Aninri increased the tally at 34minutes to 2 when he headed the ball during goal mouth scramble over the diminitive goalkeeper, Abraham, who rushed out to catch the ball.

The second half saw both teams coming out from their shelves, roaring and bombarding each other flank thus epitomising their progress in the field of play.

Enugu North mesmerising yielded dividends when pressure forced defender of Aninri to hack down a striker which resulted in a penalty that was scored giving Enugu North a consolatory goal.

The Aninri boys after conceding the lone goal henceforth took upper hand in attack and defence as they controlled the game, and with their attitude and intensity, they over ran their opponents. The 3rd and 4th goals came in quick succession by Ụzọ Haaland and while the 5th goal scored by same Ụzọ Haaland which was put behind the net of Enugu North goal keeper at 91th minute by the man of the match, Ụzọ Haaland. It sealed the hope of Enugu North players.

The coaches of the two teams in their separate speeches, agreed that the tournament was a revolution sort-of in sports development in Coal City State which is being single-handedly powered by an individual.

Also speaking to newsmen shortly after the opening match, Rt.Hon; Okafor Onyeka Cyndia, Personal Assistant to the ADC Gubernatorial Candidate, His Excellency Pastor Obi, commended his boss for his magnanimity in sponsoring the tournament.

Rt. Hon Cyndia said the tournament was beyond winning or lossing, pointing out that it enables the players to showcase their talents to the world, citing an instance that one of the players, Ateze Emeka Fabiino, discovered in the last edition of the tournament is currently playing in Asia country  while another one, Ozil, has been recruited by Enugu Rangers International football club to ply his trade.

The Aide to Pastor Obi also took time to talk on state politics, saying, “the people of Enugu State have no other choice than to elect a technocrat, eloquent scholar, erudite leader, incalculable altruist, His Excellency Pastor Donatus Obi Ozoemena as the next insurmountable Executive Governor Enugu state 2023”

His words: “Enugu State ought to be one of the leading states in Nigeria, but due to atypical system of leadership (s) in Enugu State by the present and past leaders, Enugu State has become a paradox

“75% of Enugu state youths have been left to saunter in the streets, due to poor facility for jobs opportunities. It is the primary obligation of tier’s of government to make jobs available for her subjects, but the case of Enugu State State on job opportunities amongst others remains a dark