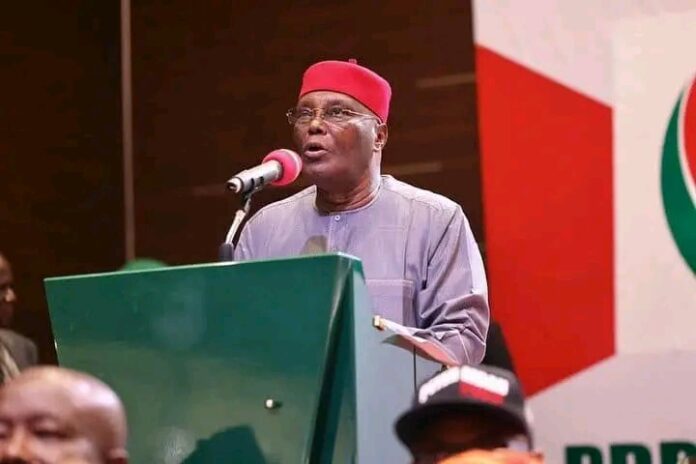 Former vice president and presidential candidate of the main opposition Peoples Democratic Party (PDP) in the upcoming 2023 general elections Atiku Abubakar, on Tuesday regaled the electorate on the policies and programmes that his administration would pursue if elected into office, saying that his presidency would pave way for the emergence of a Nigerian president of Igbo extraction in the future.

Atiku stated this at the  one-day PDP South-East zone stakeholders meeting held at the Base Event Centre, Enugu, the Enugu state capital.

The PDP presidential candidate promised  that if elected into office, his administration would place priority on reunification of the country, security, restructuring, improvement of the economy, human capital and infrastructural development, adding   that the agenda will benefit the South-East zone “as a Nigeria that truly works will work for all zones.

“We must win the election for the sake of Nigeria. It is our responsibility to unify Nigeria as I take the lead,” he promised.

He revealed that he had earlier helped candidates from some zones in the country to win the presidential election, saying that “my presidency will be a stepping stone to Igbo president in the future.”

The PDP presidential candidate promised that security would be a top priority for the government he would lead.

He also promised to restructure the country, saying that the 1999 constitution of the Federal Republic of Nigeria (as amended) would be amended to ensure devolution of power to the constituent states of the federation.

This is just as he also promised to establish state police to enhance the security of lives and property of the citizenry.

According to him, the fuel subsidy regime is a fraud, and vowed that the PDP administration at the centre would abolish it, adding that the money usuakky budgetted for payment of fuel subsidy would be utilised for infrastructural development across the country.

He further expressed worry over the Mondays sit-at-home observed in the South-East, saying the exercise has crippled the cconomy of the zone.

The PDP presidential flag bearer challenged the elders of the zone to educate the youths on the implications of the observance of the sit-at-home order which was instituted by members of the proscribed Indigenous Peoples of Biafra (IPOB).

Recall that IPOB had earlie cancelled the Monday sit-at-home, though the organisation said the exercise will be observed  only on days its leader Nnamdi Kanu, who has been in the DSS custody for about 14 monthsy, and currently facing charges bordering on treason at an Abuja Federal High Court, is brought before the court.

Meanwhile, some ‘criminal’ elements outside IPOB are said to be enforcing the sit-at-home order.

In his speech, Gov. Ugwuanyi who is the leader of the PDP in the South-East and candidate of the party for Enugu North  Senatorial District, formally welcomed the  former vice president to Enugu,  assuring him that Enugu State is essentially a PDP State.

Earlier in his speech Governor Ifeanyi Okowa of Delta State who is also the running mate to Atiku said the country is divided and needs a capable hand to reunite it.

He expressed optimism that the PDP is the only party with the capacity to reunite Nigeria.

He said, “We are in a country that is disunited. We cannot trust ourselves. This present government has disunited it more than ever before.

“The solution to the problem of Nigeria is on who has the capacity. It is only PDP that has the strength in the whole six geo-political zones.