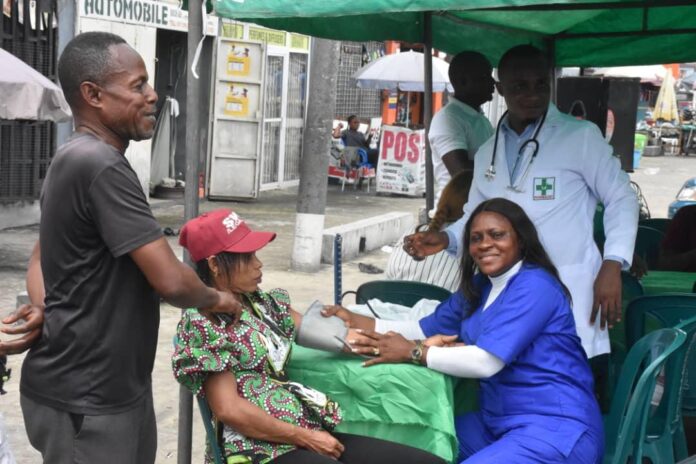 .A beneficiary receiving medical attention at the event

The group said the medical outreach at the popular Ekeki motor park in Yenagoa, the state capital is to mark it’s one year anniversary in the state.

Over 250 drivers, traders and those doing business around the area benefited from the exercise.

The health awareness component of the medical outreach focused on the  dangers of High Blood Pressure.

The South South Zonal Coordinator of the group, Mrs Timinipre Idoko, said the exercise became imperative because of the danger blood pressure poses on the people, especially business people who barely have time to do regular checks.

According to her, the group targeted drivers is that their work involved serving humanity, adding that if a driver developed high blood pressure complications while driving, the passengers and other people could be at risk.

Idoko said that, the screening and sensitization has helped several traders and commuters to be aware of the dangers of high blood pressure and how to manage it.

Earlier in her welcome address, the state Chairperson Bayelsa, Ms Eunice Nnachi said, the importance of knowing the blood pressure status cannot be overemphasized,  ignorance can lead to sudden death.

Nnachi said, “There are cases involving strokes and heart attacks, some of which could have been avoided with timely diagnosis and treatment of high blood pressure.

.”Often cardiac and stroke patients experience life threatening injuries which require extensive ongoing treatment, and a huge number of these cases could be prevented. We would encourage everyone to get to ‘know their numbers’ and check their blood pressure regularly so they can seek advice and treatment.”

The group also dispensed free drugs to those that have high blood pressure as well as referred some for further medical attention.

He said the enlightenment is important because people are guided on how to take their drugs, warning those suffering from it to reduce the intake of salt in food.

“Blood pressure doesn’t have much symptoms, the only symptom it may give is headache, and not everybody will even have the headache, that is why it is good to check it regularly.

“Asides taking drugs, people with high blood pressure should reduce the intake of salt, salt content in their food should be reduced, they should also check their weights because weight is one of the factors that can lead to high blood pressure.

“To avoid high blood pressure issues, one should eat more fruits than meat, especially as he/she is aging.” Abila said.