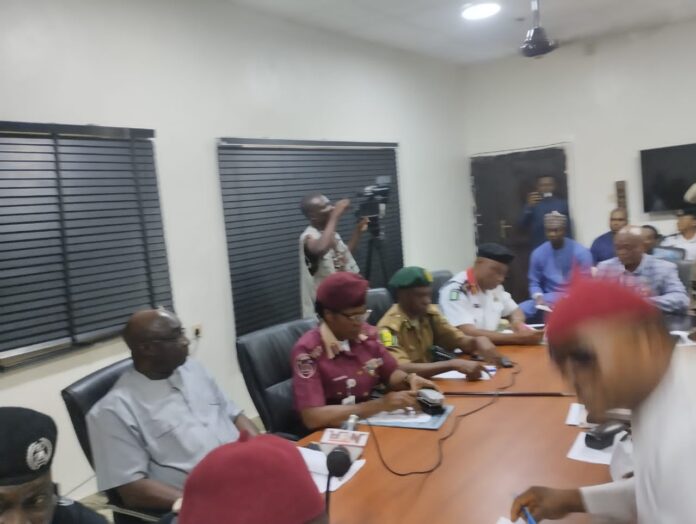 The Independent National Electoral Commission (INEC) and heads of security agencies on Tuesday in Abakaliki met to strategise on the best ways to provide adequate security in the 2023 general elections in Ebonyi.

The meeting held at INEC’s state headquarters under the auspices of the Inter-agency Consultative Committee on Election Security (ICCES) was aimed at strengthening collaboration among the various security agencies as the country inched closer to the 2023 election.

Dr Joseph Chukwu, the Resident Electoral Commissioner (REC) and co-chairman of the ICCES in a keynote address noted that peace and security were very paramount in ensuring credible, free fair and transparent elections in the state.

The REC explained that the police and other security agencies have crucial roles to play in political parties’ campaigns, rallies, processions and meetings as provided in Section 91 of the Electoral Act.

He noted that the commission in its determined effort to achieve peaceful rallies, campaigns and other pre-election activities met with the leadership of the various registered political parties in the state for a roundtable discussion.

He said: “At the said meeting, we implored the party leaders to warn their members, candidates and supporters against the use of provocative languages and indulging in other actions that may likely provoke violent reactions or emotions during campaigns and rallies.”

Chukwu further stated that the commission in her quest to achieve a credible election had scheduled a series of meetings with other key stakeholders in the electoral process including the media, civil society organisations, and traditional rulers among others.

“These are all aimed at ensuring the peaceful, secured and orderly conduct of political campaigns; rallies, processions and meetings in the state.

“On our part in INEC, we shall ensure neutrality and a level playing field to all political parties and candidates and we are also poised to conduct a free; fair credible, transparent and inclusive election in Ebonyi in 2023,”

Meanwhile, Mr Garba Aliyu, Commissioner for Police in Ebonyi in a brief remark assured the public that the police would spare no resources in ensuring adequate provision of security in every part of the state during the electioneering campaigns and other political activities.

The CP noted that peace was very paramount in the conduct of the 2023 general elections and therefore urged the citizenry to be law abiding in expressing their political beliefs, and opinions while carrying out their political obligations to their political parties.

He said: “If the citizenry is very law-abiding, rights and expectations of the individuals must be respected and in so doing, INEC and security agencies are ready to articulate this together to achieve peace and security in 2023 elections.

“We want to assure members of the public that by the grace of the Almighty we will do the best we can to the best of our ability and responsibility as security agencies to secure lives and ensure that the elections are conducted free, fair and credible.”

The CP who also is a co-chairman of the ICCES assured that the police and her sister security agencies would do their best in providing adequate security during the conduct of the general elections.

Present at the meeting were heads of the Department of State Security; Nigerian Security and Civil Defence Corps, the Nigerian Immigration Service, and the Nigerian Correctional Service.