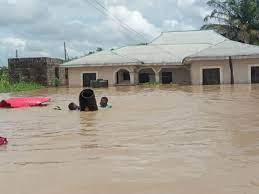 The remains of the teenager who met his untimely death was dragged into a deep canal in the area, and yet to recovered.

It was learnt that the deceased, who was in company of his playmates went swimming in the rising water close to the Bayelsa Ecumenical Centre, but was overwhelmed by high currents of the flood waters and flushed into the deep drainage channel.

The Mother of the deceased, known in the area as Mama Caro, who was in tears said the tragic incident happened at about 11am while she was away to the market to get ingredients for lunch.

“When I came back from the market, I was told he had gone swimming with friends. But I thought he was swimming in the rising water level at the compound. Until one of his friends told me he had been dragged by the flood into the canal.” she said

According to the bereaved, the family hails from Amabulu in Ojobo community of Ekeremor Local Government Area of Bayelsa state.

Meanwhile, residents of communities impacted by the floods in Bayelsa are appealing to the government to find a lasting solution to the annual menace.

Some of them who lamented their untold hardship appealed for temporary shelters and relief materials as the flood has already sacked them from their residences.

A victim,Mrs. Perez  Ayebanua said the flood waters which came to their houses late last month is already taking a toll on inhabitants with reptiles  competing with them for space.

Madam Florence Job  and Mrs Ebi Perekeme explained that while those who have the resources have left their homes for hotels or other homes elsewhere, those of them that are indigent are stuck and left behind.

The residents say they are at a loss over the situation, calling on the Bayelsa and Federal Government to come to their aid to cushion the pains of the flood.

Our Correspondent monitoring the flood situation reports that River Nun, its tributaries that receive waters from River Niger and the Epie Creek have all overflown their banks, and discharging excess water into nearby settlements.

Checks along the East West Road indicate that the flood is already affecting some sections of the road.

Worst hit is the Patani section in Delta that shares a boundary with Bayelsa communities such as Adagbabiri are already submerged by flood water.

The Mbiama bridge that connects Rivers  to Bayelsa is also being threatened by the rising flood waters from the river underneath which is full to the brim.

Meanwhile, schools in Bayelsa are on a six week break to protect pupils and students from the flood disaster.

Gov Douye Diri of Bayelsa had last week inaugurated a flood task force charged with bring relief to flood victims across the state.

Baqut rather than swing into action amidst anguish that task force led by Iselema Gbaranbiri, Bayelsa Environment Commissioner said it was visiting flooded communities for fact finding before it could make recommendations to the state government.