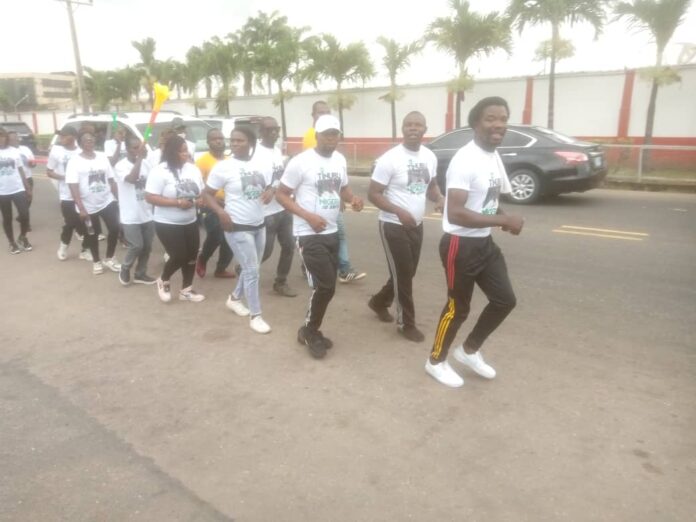 The 25-member jogging team at Ogun, enroute Lagos where they will be received by Tinubu

The All Progressives Congress (APC) youths in South-East and South-South regions jogging team that left Yenagoa enroute Lagos to drum support for the party’s presidential candidate, Bola Tinubu, has arrived Lagos, a day ahead of its plan

The youths, under the auspices of South-East/South-South Jogging for Tinubu Campaign Initiative, constituted a team of fitness enthusiasts to embark on the exercise.

Mr Samuel Adaga, the Coordinator of the exercise said in a telephone chat on Tuesday that the 25-member team is already in Lagos and heading to terminate the expedition at a reception by Tinubu.

The jogging was flagged off at Bayelsa secretariat of APC by the state APC Chairman, Dr Dennis Otiotio.

Adaga said that the team enjoyed warm reception by APC leaderships at the corridors of the Yenagoa-Lagos route at Delta, Edo and Ondo and Ogun states by APC leaderships, an indication that Tinubu’s presidential bid was widely acceptable.

According to Adaga, the team will stop over at the Lagos State Governor’s Office and later visit Tinubu, who is expected to receive the volunteers.

The coordinator explained that the team drew at least two representatives from each of the 11 states in the South-East and South-South, and executives of the group.

Adaga added that the aim was to raise awareness amongst the populace across settlements along their route from Yenagoa to Lagos.

Eight members of the 25-member team are female.