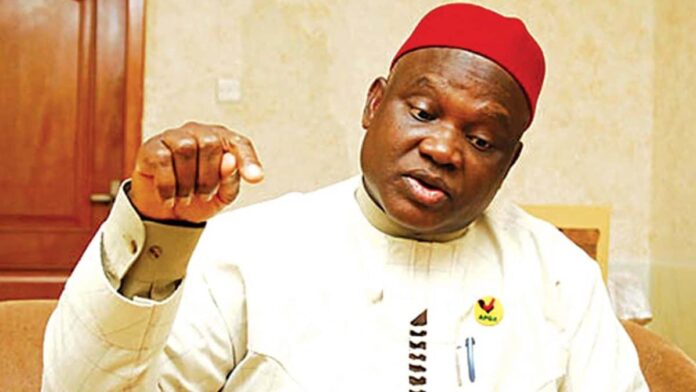 .Chief Okorie:Monday sit-at-home will be a thing of the past if the release is effected

The former founding National Chairman of the All Progressives Grand Alliance (APGA), Chief Chekwas Okorie, has appealed to President Muhammadu Buhari, to order the prompt release of Mazi Nnamdi Kanu, leader of the proscribed Indigenous People of Biafra (IPOB), from the Department of State Services (DSS) facility where he has been detained for over a year now.

Chief Okorie who is popularly known as ‘Ojeozi Ndigbo’ (Messenger of Ndigbo), said that the release of the IPOB leader from detention would translate into the automatic stoppage of the economically debilitating stay-at-home, every Monday of the week in the Southeast geopolitical zone.

In a statement he personally signed, Chief Okorie said further that the immediate release of the IPOB leader following the  October 13, 2022 judgment of the Court of Appeal that discharged him, would reduce the security concerns of the Independent National Electoral Commission (INEC), to the barest minimum in the South East and South South geopolitical zones as the country moves closer to the 2023 general elections.

SummitNews recalls that the IPOB leader was rearrested by Nigerian security agents on Sunday, June 27, 2021, in Kenya, and flown back to the country.  He has since then remained in DSS custody, and has been facing  terrorism trial.

However, the National Security Council (NSC) which met in Abuja on Friday, said the federal government would soon come up with a final decision on the the Appeal Court judgment, and Kanu’s trial.

But Chief Okorie insists that the federal government should release the IPOB leader immediately against the backdrop of the Court of Appel judgment.

The statement made available to SummitNews reads:  “I join millions of Nigerian citizens and concerned Diaspora Communities in the  joy of the well considered judgment of the Court of Appeal that discharged … the embattled leader of the Indegenous People of Biafra, IPOB, Mazi Nnamdi Kanu on Thursday, 13th October, 2022.

“I commend the three Justices of the Court of Appeal who demonstrated courage, forthrightness, erudition and dispassion in delivering this historic judgment.

“Similarly, I appreciate the commitment, resilience, discipline, diligence and admirable professionalism of the team of the learned Counsel that defended Mazi Nnamdi Kanu.

“It is with every sense of responsibility and patriotism that I urge and indeed appeal to the Federal Government of Nigeria under the leadership of President Muhammadu Buhari, to accept the verdict of the Court of Appeal in the interest of peace and national unity.

“I further appeal to the President to seize the moment and use his special presidential dispensation to extend pardon to other detainees who are facing similar charges that are currently in various Correctional Facilities across the country.

“As we await the due compliance of the Federal Government with the judgment of the Court of Appeal by promptly releasing Mazi Nnamdi Kanu from the DSS facility, I fervently appeal to the jubilant population of the Nigerian society to celebrate Mazi Nnamdi Kanu’s freedom responsibly.

“The release of Mazi Nnamdi Kanu will definitely usher in, a new era of calm and security of life and property, especially in the Southeast and South South geopolitical zones of Nigeria.

One immediate benefit of the release of Mazi Nnamdi Kanu is the automatic stoppage of the economically debilitating stay-at-home, every Monday of the week in the Southeast geopolitical zone.

“Similarly the criminals who have have been operating under the cover of IPOB pretending to be freedom fighters, will now be isolated for who they truly are.

“It is fortuitous that the Appeal Court judgment is coming at the verge of the electioneering period in our country. At least the security concerns of the Independent National Electoral Commission (INEC) would be reduced to the barest minimum in the Southy-East and South-South geopolitical zones of Nigeria.

“The Federal Government and the good people of Nigeria have everything to gain and nothing to lose by the immediate release of Mazi Nnamdi Kanu. The time for President Muhammadu Buhari to show magnanimity and leadership in the vexed issue of Mazi Nnamdi Kanu is now.”