Mr Stephen Emenike, the chairman of Izzi Local Government Area in Ebonyi has stated the commitment of his administration to the maintenance of peace and security as political parties embarked on their electioneering campaigns in the LGA.

Emenike stated this at a press briefing in Abakaliki assuring that all the political parties and their candidates contesting for the various elective positions in the 2023 general elections would be provided with the enabling environment to campaign in the area.

He noted that his administration would do everything within the ambit of the law to secure the lives of property of its people before, during and after the elections and urged political parties to play by the rules.

Emenike spoke on the alleged attack on the convoy of Prof Benard Odoh, the governorship candidate of the All Progressives Grand Alliance (APGA) who was on a campaign rally to the area as spurious and unfounded. 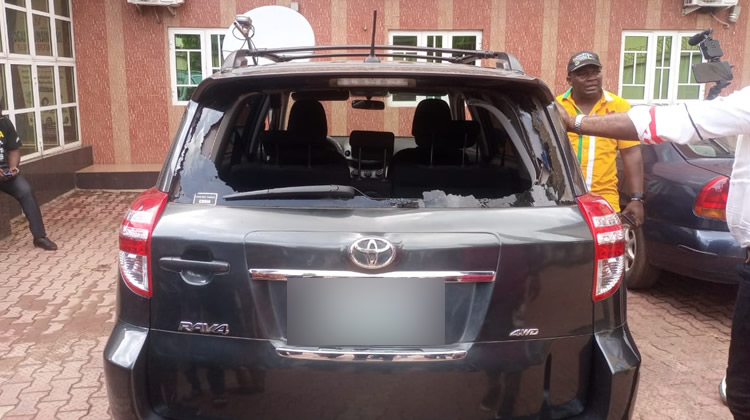 Vandalized vehicle from the alleged attack on the convoy of Prof. Benard Odoh,APGA Guber candidate for 2023 Election at Izzi LGA

He said: “As a government, we are committed to promoting peaceful coexistence and we want to provide the freest platform for everyone to operate within the context of their political parties.

He noted that the Izzi people of the state were known to be peace-loving and hospitable and would not be involved in any political violence or engaged in any activity that would engender crisis.