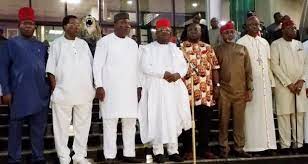 Governors of the South-East region have lamented the rising levels of insecurity in the region and are planning a joint highways patrol as part of moves to combat the trend.

This was part of their resolution after a meeting in Enugu , the Enugu state capital on Sunday.

“South-East Governors decried the state of insecurity in the region. Our economic activities have come to a halt while kidnapping and wanton killing have become the order of the day,” the governors said in a communique.

“South-East Governors call on the Federal Government to come to our aid in providing security in the Zone bearing in mind that elections are around the corner.

“Meanwhile, South-East Governors have agreed to set up a 24-hour Joint Patrol on all major highways within the South East, especially during the Christmas season.”

The governors also distanced themselves from the Eastern Security Network (ESN), reiterating that they only “jointly formed Ebubeagu and Forest Guards, not ESN. So, it is not correct for any person to allude to the fact that South East Governors created ESN”.

On the case involving the leader of the proscribed Indigenous Peoples of Biafra (IPOB) Nnamdi Kanu, the South-East Governors’ Forum said it is “watching with keen interest”.

“However, we believe that a political solution is still possible in this circumstance,” they added.

Away from the IPOB leader, part of the governors’ resolution also centred on the recent floods which have displaced millions and killed hundreds in several parts of Nigeria.

They are calling on the Federal Government to alleviate the sufferings of those affected and fashion out a “term solution” to the menace.

“South-East Governors have decided to put funds together to further assist the victims of flooding in our five states in the South-East,” the governors said.