2023: I’m going to the House of Reps to provide uncommon services to the people of Enugu East/Isi-Uzo Federal Constituency – Says Prof. Nnamchi 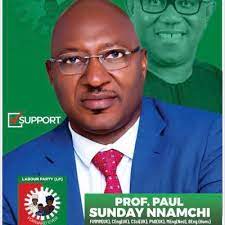 The tragedy of politics and governance in Nigeria is that more often than not, most of the elected public office holders are  plain rookies in the game.  Many of them neither have the requisite educational background nor the necessary training and exposure to enable them grapple with the onerous demands of leadership at the various levels of governance.

The result is that such unprepared politicians end up fouling the system without providing the masses of the people with  quality services and by extension the proverbial dividends of democracy needed to uplift their living standards.

For instance, in both houses of the National Assembly as well as various states’ Houses of Assembly, some lawmakers serve out there tenure without moving a single motion or introducing a bill  because they don’t know the ingridients associated with  law-making.  This is despite earning homongous amount of money as salaries and allowances.   At best, such legislators are described as ‘yes members’ or ‘ bench warmers.’

However, as the country inches towards the 2023 general elections, there is a groundswell of opinion that the people deserve politicians who are better equipped in all ramifications to turn around the ailing economy, and put it on the path of development and growth.

This is where Professor Paul Sunday Nnamchi, comes in.  He is currently the  Head of Department of Biomedical Engineering, University of Nigeria, Nsukka (UNN).

An international scholar, Professor Nnamchi is the House of Representatives candidate of the Labour Party (LP) for Enugu East/Isi-Uzo Federal Constituency in Enugu state.

“ I am going to the House of Representatives to provide uncommon services for my people,” the chartered engineer told Summit News in an interview.

He has had a few opportunities to highlight his work to a broader audience, and his work has been publicised on various platforms, including The Royal Academy of Engineering, United Kingdom.

The LP House of Reps candidate has also completed post-doctoral fellowships in University of Sheffield and Northumbria University, both in United Kingdom with interdisciplinary research experience in new and emerging biomaterials designs, microstructure physics and self-healing materials.

Professor Nnamchi is a member of European Biomedical Society, a Fellow of the Institute of Materials, Minerals, and Mining (FIMMM, United Kingdom),

He is a Chartered Engineer, (C.Eng., United Kingdom), and a Chattered Scientist (C.Sc., United Kingdom) and other International professional organisations, including Institute of Physics (IOP, UK (2011) and a COREN registered Nigerian Engineer

He had for long watched politics from the sidelines hoping and believing that elected public office holders, especially from his constituency, would make positive impacts on the lives of the people through quality representation at the various levels of governance.  But that seems not to be, especially going by the level of complaints and dissilusionment among the people over the parlous state of the economy and the prevailing politics of prebendialism.

And so today, Professor Nnamchi has decided to drop his academic gown to make a foray into politics with the aim of changing the ugly narrative for the better.

“There comes a time in a man’s life when  after looking at how things are going,  you will tell  yourself that it’s time to participate, and if you don’t participate in anything,  you wouldn’t say that things are not working,” he said apparently justifying his entry into politicis.

“ Apart from staying on the fence,  I also know,  and have seen  people say that they are dissilusioned. Some of them say they are helpless; they don’t actually know what to do or whom to trust.   I hear some people say enough is enough,  but do they actually have alternatives?

“ Looking at politics now, the Labour Party (LP) is providing the alternative that people are yearning for in the whole country,  especially in the South-East where people have for long been caged in one political party depending on the state.

“ People don’t actually do election, what they do is selection.  And not only that it is selection, democracy here  continues to be by the few for the few.

“ However, the new electoral act has provided a way for the people to get around these issues;  it has  strengthened the peoples faith in what you call governance.

He maintained that if he gets elected into office, he will be the “servant of the people,” by bringing their needs and aspirations before the floor of the House, and also working with felow lawmakers, ensure that  those needs and aspirations are given legislative teeth and passage into law.

“One must have that drive for service, drive to provide, drive to be the servant of the people in the House – and you know that by its composition, the House of Representatives is the peoples House, not a personal House,  and so being the peoples House, it  will continue to be where the peoples voices are heard nationally, where the needs in the local communities will be heard nationally, and being there, you will  go on to make sure  that your constituencies problems or concerns reach to the top.

“If you have a  representative that is aloof, or doesn’t even have the background  or the boldness to offer those services or to make the views of the people heard, or he is sent in there by a particular paymaster, or godfather, then the peoples interests will in no way be served.

“ I believe the godfather should be the people, and not the other way round.  It’s like when you employ somebody in a company, and the person turns around to become the employer instead of the employee.  No, it doesn’t work that way,” he said.

He maintained that Enugu East/Isi Uzo Federal Constituency had for long been denied quality representation in the House of Representatives, and as a result have not enjoined the  requisite dividends of democracy.

He enjoined the electorate to vote massively for him in the upcoming general elections, saying that if elected, he will change the ugly narrative for the better.