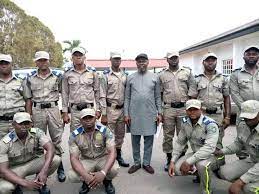 Scores of people at the weekend, sustained various degrees of injuries when Ebubeàgu security operatives invaded the Okposi venue of the Labour Party (LP) rally, in the Ohaozara Local Government Area of Ebonyi State. The Labour Party House of Assembly candidate for Ohaozara East, Mr. David Ogbonna, told reporters that the attackers shot sporadically at party faithful at the rally and inflicted varying degrees of injuries on them.

He said the attackers were led by the Executive Chairman of Ohaozara Local Government Area, Consider Ajah.

Mr. Ogbonna said: “we scheduled a meeting with our supporters in Okposi community today. Mr Nkemkanma Kama, was supposed to be there. We were to receive defectors from PDP, APGA and other parties.”

According to him, “as we were going, they suddenly passed us with speed. When we got to Okposi we saw them barricading the entire road. We made a U Turn towards Onitsha Local Government, because we didn’t want our security to have altercations with them.”

Mr. Ogbonna further said the attackers led by the Council chairman, Consider Aja, invaded the venue of the rally, while members gathered at the Party office at Mgbom-Okposi, waiting for the arrival of Nkemkanma Kama the party’s Candidate for Ohaozara/Onicha/Ivo Federal Constituency.

Said Ogbonna “as they entered the venue, our supporters on the road waiting for us thought we were coming possibly because of the exotic car of the Council Chairman. They rushed to welcome us only to meet young men numbering over forty, wielding all kinds of automatic guns as they came down from the fully loaded Toyota Hiace Bus and Sienna buses and opened fire on them.”

He said three persons have so far been confirmed shot on their legs, as one had his Femur, bone of the thigh shattered and had been transferred to an Orthopedic Centre.

“As at yesterday night, three of our supporters from Ugwulangwu reported that men of Ebubeagu visited their compounds asking after them.These young boys have relocated from the community to save their lives,” he said.

The accused Council Chairman, Consider Aja however, denied leading an attack on the Labour Party supporters

He admitted that Ebubeagu officials went to the area to stop the people gathered there from blocking the road, which he said is a federal highway.

“We did not attack anybody. They were blocking the road which is a federal highway and we had to intervene to prevent them from disrupting people’s movement,” he insisted

The Chairman further noted that the organisers did not get approval from the Local Government before holding the rally.

“We have a law that before you hold any form of gathering you must get approval from the Local Government for security purposes. But they did not do that,” he emphasized.

Mr Aja said that government has no interest in what any other party is doing, but insisted that they should do the right thing at all times.

“They may have been attacked by their members who they may have had a disagreement with and they now turn around and blame it on Ebubeagu,” he added.

Although Ebubeagu is a security outfit, strongly backed by the governments of the five south-east states, the high handedness of the operatives has been widely condemned, with calls for its disbandment.

He was hurriedly taken to the police after several calls from his family members and political associates. Okorie was later arraigned in court and consequently remanded in prison.

The outfit has been populary noted for its nefarious acts of indiscriminate arrest, torture, and even extra judicial killings in the state, leading to calls by opposition parties and rights groups for it to be disbanded.

Chief Onyike was taken to the group’s office in Abakaliki, where he was  tortured for over an hour before he was released.