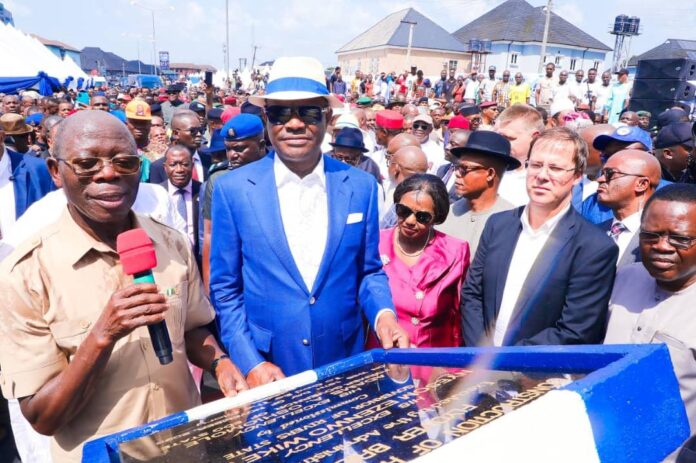 Former governor of Edo State Comrade Adams Oshomhiole said on Wednesday in Port Harcourt the Rivers state capital, that Governor Ezenwo Nyesom Wike, has set a standard and made the difference in projects and governance in Nigeria.

Comrade Oshiomhole said this while commissioning the Rumuepirikom flyover, the 8th so far constructed and completed by the administration of governor Wike.

“ So, I agree that even his worse critics will admit that governor Wike has made a difference. You made a difference not only in terms of projects, but  also in governance in Nigeria,” said the chieftain of the ruling All Progressives Congress (APC)

.He congratulated governor Wike for keeping to his promises to his people.

“When politicians make statements, make promises or even make agreements or even enact laws and the laws are not to be obeyed by themselves but to be obeyed by others and when they default in their promise or standing, they say that is politics for you”.

He stated that the flyover is designed to last, will reduce time spent in traffic, improve the socio-economic dynamics within the benefitting communities in addition to the enhanced value of property in the area.

Speaking at sideline of the commissioning with journalists, the chairman of Eleme Local Government Area, Hon. Obarilomate Ollor, stressed the importance of the Rumueprikom flyover bridge to road users in Port Harcourt positing that he suggested the idea to the governor according to him the Governor graciously heed to the suggestion.

“This flyover bridge was very necessary in this site. There was a serious traffic grilled up here before now, we are witnesses to it. And by the grace of God, I was one of  those that suggested this to him. Today it has come to be manifest.

“On the 22nd of November 2019, I sent him a message, and  suggested that the level of gridlock we are experiencing here deserved a bridge like this. He graciously heeded to my advice, and that is why we are having the commissioning; today am a proud person.

“I believe that what he has done well for the people of Rivers State will make him somebody that will never be forgotten even when he has left office as governor. He is the best governor Rivers State has ever produced. He has surpassed ever other records as standard.”

Hon. Ollor further stated that flyover bridge will enhance the economy and economic activities of the area, reiterated Rivers people support and recognition of governor Nyesom Wike their leader and statesman in Rivers State

“The project has improved the economy of this area, you that good road network attracts improved economy. The people from this area should be gracefully to have somebody like the governor and they should continue to support him in all his programme and his political thrive

There’s no reason anybody from this part of the world not support or encourage Chief Barr Nyesom Wike as political leader and a statesman whose glory and name will leave in the stand of time” Hon. Ollor contende