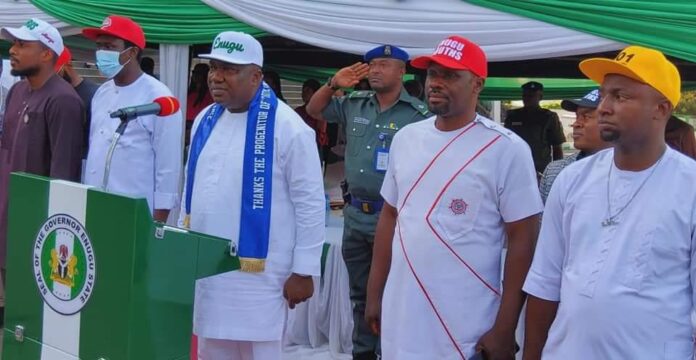 Gov. Ugwuanyi speaking at the event

Enugu State youths, on Thursday, rose in unison to express their profound gratitude to Governor Ifeanyi Ugwuanyi for giving them a sense of belonging in governance, saying that the gesture is unprecedented in the history of the state.

They said that Gov. Ugwuanyi in his humility, kind-heartedness, benevolence, peaceful disposition, vision and passion for the growth of young persons, gave them the platform to excel as future leaders, saying that the governor has planted them (youths) as seeds and that they have germinated.

The youths made the remarks when they paid a ‘Thank-you’ visit to the governor at the Government House, Enugu.

Comprising leaders and representatives of various youth groups across the state, the youths of Enugu State disclosed that they are major beneficiaries of Gov. Ugwuanyi’s people-oriented administration, stressing that the governor’s commitment to youth inclusiveness is second to none in the annals of the state.

They also expressed gratitude to Gov. Ugwuanyi for being gender sensitive, stating that his administration, for the first in the history of Enugu State, accommodated more women, especially the young ones in various capacities in governance.

The elated youths also commended Gov. Ugwuanyi for his administration’s development strides in urban and rural areas with the limited resources at its disposal, maintaining that they are impressed with what the governor has done in opening up the rural areas and satellite towns for socio-economic expansion, in line with his inaugural address.

The youths equally applauded the governor for the establishment of the State University of Medical and Applied Sciences (SUMAS), Igbo-Eno, Enugu State, to encourage and enhance medical education and quality healthcare delivery for residents of the state.

They, therefore, passed a vote of confidence in Gov. Ugwuanyi and pledged to continue to support his peaceful and result-oriented administration as well as stand by him as their father, even after his tenure as governor.

Speaking, the Convener of Enugu State youths, Hon. Bartholomew Ebuka Okoh, expressed delight that it was under Gov. Ugwuanyi’s administration that their clarion call for youth inclusiveness was answered, saying: “This is what we have been asking for but they kept telling us that the youths are leaders of tomorrow; but you (Ugwuanyi) made us know that tomorrow is now.

“Under your regime, we have the youngest Chairman and Deputy Chairman of Local Government Areas, and the youngest Special Assistant (SA) to the Governor in the history of Enugu State.

“It is under your regime that we know that a governor calls a nobody and makes him somebody. You don’t observe protocol, you pick everybody’s call irrespective of class and bless people like Jesus Christ.  Under your regime you gave jobs to our women and youths.”

Revealing that Gov. Ugwuanyi’s peace and good governance initiatives have united the youths of Enugu State, Hon. Okoh, who is the Chairman of National Youth Council, Enugu State Chapter, pointed out that it was in recognition of the governor’s rare leadership qualities that they came to thank and reassure him of their solidarity, maximum support and unceasing prayers for the peaceful and successful end of his administration in 2023.

Climax of the visit was the honouring of the governor as the “Progenitor of Youth Inclusion in Governance” by Enugu State youths.