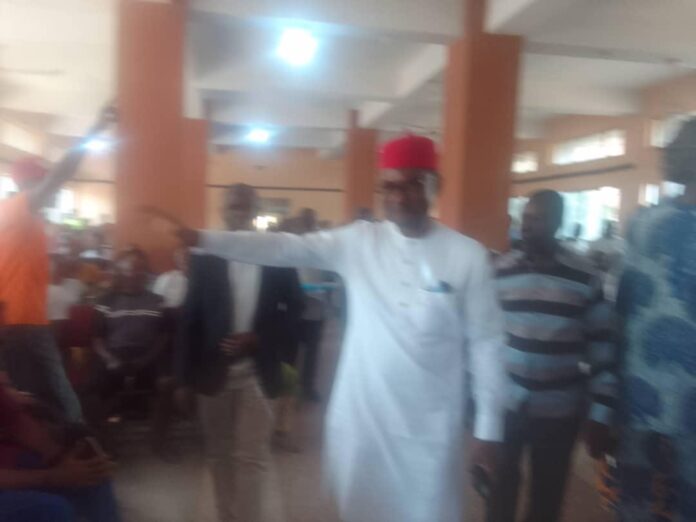 “These are critical times that call for radical actions”, proclaimed the Enugu 2023 gubernatorial candidate of the All Progressives Grand Alliance (APGA) Chief Frank Nweke (Jnr).

The aforementioned statement which is conspicuously engraved in the APGA flag-bearer’s manifesto, ahead of the 2023 general election, was re-echoed by him last Saturday at a Town Hall meeting he had with members of the Enugu State Citizens Support for Equity and Good Governance (ESCSEG) at Royal Palace, Enugu.

Nweke stormed the Royal Palace at 1.45 pm as scheduled into the waiting hands of members of the ESCSEG who had in large numbers seated to listen to his campaign message.

Trust the former Minister for Information, as he stepped into the hall, he began exchanging pleasantries with members of the ESCSEG led by its State Coordinator, Comrade Onyeodozi Emmanuel Onwe, a development many saw as a sign of humility.

Little wonder, there was a resounding ovation heralding the public engagement as each member of the audience stood up to have a glimpse of their August  visitor. The atmosphere was literary electrified with excitement.

Shortly after introduction of the ESCSEG leadership and other formalities, the State Coordinator of ESCSEG, Comrade Onwe climbed to the podium to read his welcome address.

In his speech, Comrade Onwe said that they were happy to receive the APGA flag-bearer, stressing that the  interface with his members and indeed Enugu people is in line with the mission of their pressure group.

Onwe said, “Ours, very simply, to engage the citizens to participate actively in the political processes thereby reducing political apathy among the citizens of the state.

According to him, “Until the citizens are politically and consciously aware of their political, economical and civic responsibilities, we will continue to have problems of leader-follower syndrome.

He maintained, “the focus of ESCSEG now is to see how we can change the political narrative of our state. The era of endorsement by few political elites must come to an end come 2023.

His words: “We want to see citizens deciding who represent them at all levels of government through transparent electoral processes.

“The current problems we are facing in the country today are traceable to unwillingness of the citizens (followers) to follow due process as a result of decades of bad governance.

“The ESCSEG is fully prepared to ensure that the electorate plays a prominent role on who governs them at all levels of governance come 2023 in the state. Gone are the days when few elite in the name of stakeholders sat and decide the fate of millions of citizens of the state.

“The citizens have been short-changed in the past elections through intimidation, inducement and imposition thereby reducing the citizens to the background

The visibly elated APGA standard bearer told the audience that he is in a familiar terrain and that he is not  standing, not just to be counted but to make the count worth it.

For the APGA flag-bearer, this is not the best of time for the people of the state and Nigerians, hence there is need to change the status-quo.

Indeed, Nweke speech was intermittently followed with applause from the audience as he promised them hope, saying, “Enugu has never had it this bad and we can no longer sit back and just complain”

Nweke told them, “The political and governance spaces deserve the active participation of a critical mass of our best and brightest minds; people of integrity, honour, competence, capacity and creative problem-solving skills.

“I had the privilege of being invited to work with the Government a long time ago and have had the opportunity to serve in some sensitive positions.

“ I’ve also had the opportunity to travel widely around Enugu State in my capacity as the State Coordinator of the Community County Council. I have had experiences that have allowed me to not only understand how government works but be able to identify with a lot of clarity, the needs of the people and the things that need to be done to transform our society.

“I was first appointed as Economic Consultant in Enugu State and I assure you I can fix Enugu State, create an enabling environment for investment.

“I have first-hand governance at both the State and National levels. I am standing on the pedigree of the positions that I have held and led with excellence, proven results and a high sense of integrity.

“In these places, my sense of empathy, excellence, character, accountability, capacity and competence, critical reasoning and emotional intelligence were honed.

“My skills in public policy, evidence-backed development planning and implementation have been all sharpened through these years. I believe that my record of service enables me to be able to say that I have the personal discipline, the capacity and the competence to transform the State.

“I promise that my team and I will restore the trust in Government by dedicating ourselves to the fundamentals – building a stable and prosperous state where every citizen is economically empowered, has access to a stable power supply, potable water, excellent healthcare and quality education and every life is secure and treated with respect and dignity”, he said.

The high points of the event was cultural dance by a group of women who entertained the audience.

It would be recalled that Nweke apart from moving his campaign train to communities, last two weeks held similar Town Hall meeting with stakeholders at Enugu Chambers of Commerce, Industries, Mines and Agriculture (ECCIMA) where he vowed to reposition Enugu State if elected as governor in 2023