HomePolitics2023: I'LL MAKE ABIA A MODEL STATE FOR THE BENEFIT OF...
Politics 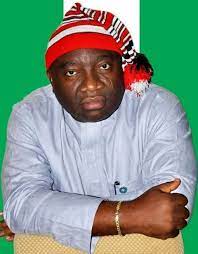 The governorship candidate of the All Progressives Grand Alliance (APGA) Abia State, in  the upcoming general elections, Professor Gregory Ikechukwu Ibe, has promised to turn Abia into a model state for the benefit of Abians, their children, and children yet unborn, stressing that he is ready to sign a pact with the media to hold him accountable  concerning his performance and manifesto if he is elected as the next governor of the state.

Speaking during a zoom media chat with Abia Media Forum (AFM)  consisting of Abia media professionals nationwide, Prof. Ibe revealed that he is the only candidate among all the contestants that has the greatest investment in the state, and who became a billionaire at the age of 21. adding that he has done well for himself and he is only coming to make Abia a model state for the benefit of Abians, their children and those yet unborn and not for the till as most politicians are accustomed to.

Professor Ibe, founder and chancellor of Gregory University Uturu said he has done a lot for Abia state as a member of the Peoples Democratic Party (PDP) without announcing it and even up till now the state is owing him the sum of N160 million which he lent the government since 2003 to complete the Abia State University Teaching Hospital (ABSUTH) Aba which enabled the university get accreditation then.

Ibe who said his intervention is currently transforming the teaching of Science, Technology and Mathematics in Nigeria at all levels of education also explained his plans to transform education in the state, the details of which will be seen in his manifesto which will he promised to share to Abians this week.

See also  2023 Presidency: Why I cannot be running mate to Peter Obi -Kwankwaso

As part of his plans to make Abia a model state for others to come and copy, “Ibe who is a human developer and innovator said, “expect Aba to become a world trade centre when I become governor.”

Explaining how he intends to bring Americans to transform Aba, he noted that all he needs is for the mandate to be given to him and the people will seat and watch how he will use his contacts all over the world to turn around the state into in few years.

He said he left PDP after his patience ran out with the inept leadership of the government and the fact he was shortchanged after all he did to prop the party.

As a member of PDP, his ideas through innovation were never accepted. For instance, he said, “I met the governor to give me the UBE building at Ubakala that has been abandoned, so I could introduce transformative Education as approved for his university by the United Nations. “They promised to give me but they never did.”

Already Gregory University has launched the United Nations Education Transmission Centre and the West African Green Energy Development Institute for human capital development and the first of its kind in Africa.

When they refused, he said he went ahead in partnership with the university to found ‘Skill G’ Nigeria Limited which set up an innovation hub in Abuja to boost technological advancement in Africa with support from the Israeli Embassy on scientific and technological products emanating from the centre.

What we do is “advertise across Nigeria, if you are either in the university where our equipment is or not, you submit your ideas, and I will look at the idea with the Israeli government. Israeli government gives me partial funds.

From there I will select the best ideas, invite the owners, keep them in the hotel for six to nine months, and feed them. I will bring investors from all over the world to Abuja and we will turn the ideas into inventions and we will expose them to people that buy inventions. You will see the Innovation hub on airport road in Abuja.”

He said while in PDP, He expressed his interest to become governor in 2013, 2014, but the then governor asked him to wait because he was still a young man, and since he just opened a university he should wait and nurture it. He waited and supported PDP wholeheartedly.

“During the COVID, I donated 850 bags of rice, three ambulances, and testing equipment for COVID because I was the supplier of these machines for NCDC.

“By the time COVID ended, or about ending, hunger was still biting. And they have not shared the budgeted food; I embarked on sharing food in every local government in Abia state with the university buses. I fumigated every market in Abia, with my university workers. I was doing these things and many more to endear the PDP to the people, despite their lapses.

“When it came 2022, I came out again to run but the party denied me the opportunity so I moved to APGA. Since I joined APGA I have embarked on what I started in 1991, medical outreach in all the local government areas.

“I commenced on the surgeries, I have treated our brothers and sisters, I have given out 16,000 eye-glasses, my buses run free transport in the state, I have over 400 Abians on scholarship from the 17 local government in the university.

“I am coming to make a change. I am not joining forces with any godfather to deny my grandchildren the opportunity of developing Abia,” Ibe said, adding that on free transportation alone he has spent over N1 billion from his purse.

Ibe who said he has worked with all the presidents in Nigeria from Obasanjo in different capacities, and also a consultant to 15 countries of the world said he weeps at the level of wastage of human capital in Abia which he is coming to correct, insisting that while others come to develop only their local governments, as governor he will seat with each local government, find out their strengths and weaknesses and develop them in that wise.

He grieves that Abia State University Teaching Hospital has lost accreditation but noted that he is building a 1,000-bed teaching hospital for Gregory university in Ezinnachi, maintaining that what ABSUTH lost, Abians have also regained through Gregory University.

“I have my programme for education. For instance, there is no school in Bende even though it has a large population. We need to have a university of medical and allied sciences in Abia.

Ibe explained that he has so much to do to rescue Abia and therefore called on the people to “follow who know road.”