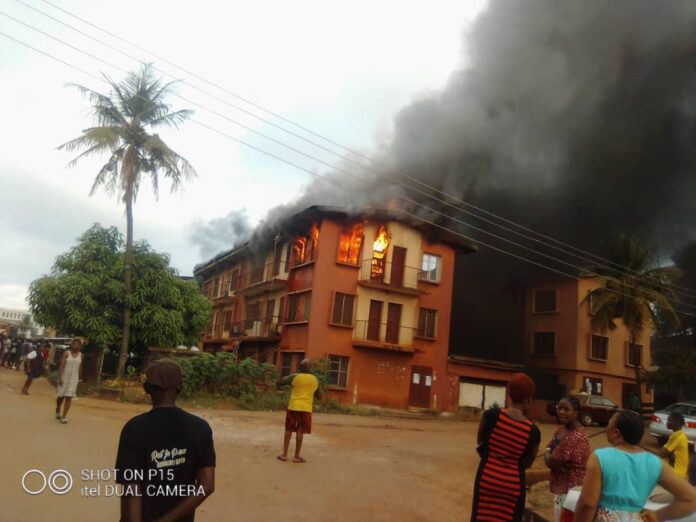 The call yesterday followed a fire outbreak at No. 7 Chiene Street, Achara Layout, Enugu, in Enugu South Council Area, which destroyed part of the two-storey building.

Although the real cause of the inferno which started at about few minutes past 7am  on Monday is yet to be ascertained,  some residents said but for the quick intervention of men of the Enugu State Fire Service, the inferno would have spread to the entire building which has six flats.

Although, no casualty was recorded in the unfortunate incident, but the entire properties inside the particular flat where the fire started were complely damaged.

The octogenarian widow Landlady of the building, who hails from Oraifite in Ekwusigo Local Government Area of Anambra state, could not utter a word, when newsmen visited the scene and made efforts to interview her and the daughter who is the occupant of the affected flat, as they looked traumatized.

However, speaking with newsmen, a neighbour who  witnessed the incident, and gave his name as Hon. Chika Nzelu, said “it’s really really sad and unfortunate.

Hon. Nzelu, who was a former aide to the immediate past Governor of Anambra state, Chief Wily Obiano, said residents and passersby made efforts to extinguish the fire but to no avail, as it was beyond what they could  control with just ordinary water.

He,  however,  commended the Enugu fire fighting men for responding to a distress call, but regretted that they came a bit  late when the fire had almost wrecked serious havoc on the building, stressing the need for prompt response during emergencies such as fire disaster.

Also fielding questions from Journalists, leader of the Enugu fire Service team that salvaged the situation, Mr. Chukwuma Ugwuaneke, said “we got a distress  emergency call from residents of this  area this morning alerting us that there was a fire outbreak at # 7 Chiene street.

“On receiving the call,  we immediately mobilized our men and fire engine to the scene. And  we thank God that we were able to control and extinguish the fire at the point we met it,” he said.

He, therefore, advised Enugu residents to always take fire precautionary measures very seriously, adding that people must always switch off their electrical appliances before going out, clear bushes around their houses especially this period of harmattan, and above all ensure that they have fire extinguisher in their homes

Ugwuaneke equally urged the people to always call the fire service emergency phone numbers whenever there is fire incident in their areas so as to enable firemen to intervene before such fire escalates to a dangerous level.