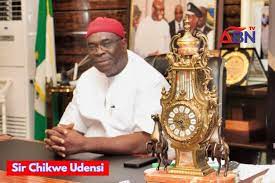 Sir Udensi: “Peter Obi is the best of all the presidential candidates.”

A member of the Board of Trustees (BoT) of All Progressives Grand Alliance, APGA, Sir Chikwe Udensi, has donated a command and control unit as well as a monitoring system to support the election of Labour Party (LP) presidential candidate,Mr.  Peter Obi, as the country’s next president in 2023.

He also donated two buses to support the presidential campaign of Peter Obi. Sir Udensi, an Interpol Systems Consultant announced the donations on Tuesday when he played host for the second time to Peter Obi at his Abuja office.

The system allows for the monitoring of over 176,000 polling units in the country to ensure there are no incidences and where there is one, they are resolved immediately.

“It is an incidence-recording office with high resolution servers and computers and it helps in monitoring the election in all angles.

“We have also trained 40 volunteers, one person for each state and the FCT, plus extra three persons who will serve as the coordinators.

“They are to assist in monitoring the units with the high-tech systems we have provided,” he said.

Sir Udensi described Peter Obi as the best of all the presidential candidates.

According to him, no other presidential candidate beats the profile of Obi whom he said as Governor of Anambra did not borrow to fund the budget and did not siphon billions of Naira like his other counterparts.

“It has not happened since the return of democracy in 1999, no governor has left office and left the government account in green, but Peter Obi, is the only one who left billions of Naira along with investments.

“We must have to commend him,” he said.

He insists that the situation of the country today demands emergency and not just about party politics, adding that Peter Obi, is the only person that has the capacity to rescue Nigeria.