HomePoliticsAdeleke sworn-in as Osun Governor, promises to be 'servant to all'
Politics 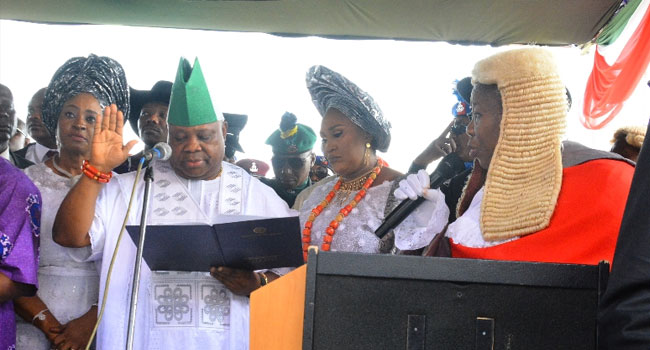 Senator Ademola Adeleke has been sworn in as the governor of Osun State in a ceremony attended by top dignitaries and hundreds of residents.

In the ceremony held at the Osogbo City Stadium in the Osun State capital on Sunday, Adeleke promised to serve the people and tackle the challenges facing the state.

“As I accept the mantle of leadership entrusted upon me by the people of our dear state, I am conscious of the enormous challenges and responsibilities ahead of me and will begin from this hour workday and night with deep sense of purpose to be a servant to you all,” he said in his inaugural address.

Not ‘Business As Usual’

While pledging to reduce the poverty rate and deliver dividends of democracy to the people, he said it is no longer business as usual in the state.

“Our administration will demonstrate a high sense of urgency, transparency, justice, a

His inauguration, which was attended by top members of his party – the Peoples Democratic Party (PDP)  –  including Atiku Abubakar and his running mate Ifeanyi Okowa, also saw his superstar nephew David Adeleke better known as Davido making a first public appearance since his son Ifeanyi’s death.

Sunday’s event came months after Adeleke of the PDP defeated then-incumbent Gboyega Oyetola of the All Progressives Congress (APC) to become the sixth governor of the South-West state.

Adeleke’s victory in July came in his second attempt after losing to Oyetola in the 2018 guber race.