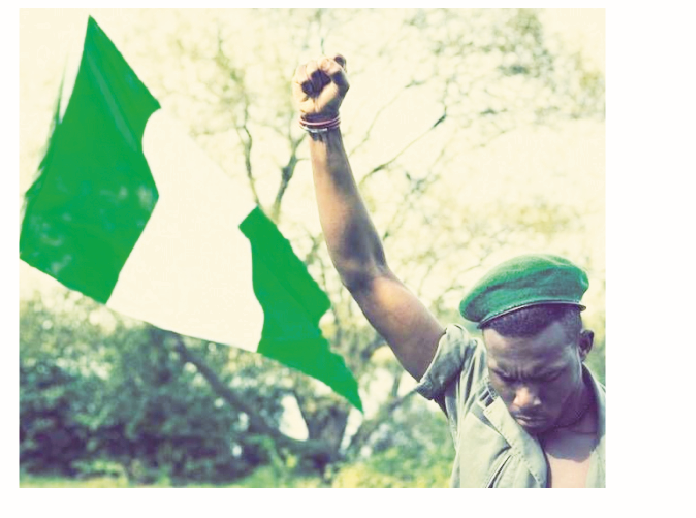 Democracy is built on the principle that all parties are equal.

Equality means that all individuals and their political parties have equal opportunities, and should not be discriminated against.

In a democracy, individuals and groups maintain their right to different sets of beliefs and ideologies. In other words, democratic societies are politically tolerant. This means that while the majority may have their way, the minority must be allowed to have their space and their say.

The rights of the minority must and should be protected. Those parties that are not in office and in power must be allowed to organize, allowed to speak and allowed to participate. A situation wherein some groups or parties are not allowed access to public spaces or are not allowed to display their billboards is patently undemocratic.

A situation as is happening in some states such as Ebonyi where parties other than the one in power is not allowed to mount billboards is patently undemocratic. A situation where rallies are disrupted by agents of people in power is an anomaly in a democracy. Democracy can be defined as a marketplace of ideas, so, what kind of market would it be when some parties are prevented from participation?

One of the major goals of democracy is inclusiveness and unity in diversity. To achieve this, respect for all people and their points of view is needed. Decisions are more likely to be accepted, even by those who oppose them, if all citizens have been allowed to freely discuss, debate to agree and disagree!

Sadly, ahead of the 2023 general elections, many state governors are behaving like tyrannical Lords and are preventing minority parties from fully participating in the electioneering processes. Sometimes these roadblocks put on the way of the opposition are presented and clothed with legality but no one is deceived about the intentions of those behind such draconic laws.

Recently, Anambra State governor, Prof Chukwuma Soludo, threatened to remove all billboards in the state belonging to politicians if they fail to pay tax on them. In a release by the managing director of Anambra State Signage Agency, ANSAA, Mr Tony Ujubuonu, the state government gave two weeks’ notice for all politicians and political parties in the state with billboards to pay up. Political parties view this as calculated attempt to deny them visibility ahead of the elections.

In Kogi State, armed hoodlums allegedly sponsored by the ruling All Progressives Congress (APC) attacked the billboards and supporters of the Labour Party House of Representatives candidate for Ankpa, Omala and Olamaboro federal constituency. Chief Peter Ojonugwa made this known in a statement in which he alleged that thugs attacked his loyalists and campaign billboards in Ibana, Ikeje and other areas in the local government area. He accused a chieftain of APC of being behind the attacks.

Like in Anambra State, Kogi State Inland Revenue Services (KGIRS) has also given political parties demand letter for the payment of N37.5 million signage fees for campaign posters across the state. Even though KGIRS claimed it was not targeted at any party, but a general charge for all political parties, many are not convinced. Not the least of which is the PDP. The party alleged that the demand for such huge amount was to stifle the opposition in the state. It described the move as political hostility.

A breakdown of the fees indicates that the presidential candidates have been billed N10 million, the three senatorial candidates will pay N2 million each, while the House of Representatives and House of Assembly candidates will pay N1 million and N500,000 respectively. The PDP director of media and communications, Dayo Onibiyo, said from the letter dated October 24, 2022, the room for payment would expire on November 10, 2022.

PDP in Plateau State also alleged that APC is planning to destroy its billboards and posters. It claimed APC was mobilising political thugs to remove its billboards and campaign materials within Jos metropolis and the state at large.

“The premeditated act of violence, we understand, is intended to deceive the APC presidential candidate and his running mate into believing that Plateau belongs to the APC!

“By this statement, we are putting the Independent National Electoral Commission (INEC) on notice, as such acts of violence and destruction of campaign materials have been outlawed by the Electoral Act in Sections 92 and 93,” leader of the PDP media team, Mangna Wamyil, had said.

In Lagos, the state Signage and Advertisement Agency has been accused of mandating advert companies in the state to reject campaign adverts from other parties. The agency in a statement signed by its managing director, Adedamola Docemo, has denied the allegation. However, a leaked audio video posted by a Twitter user @realolaudah and captioned

“If you do not see any billboard in Lagos State advertising any other political party but APC, this is the reason why,” indicated otherwise.

The Rivers State governor, Nyesom Wike, has recently drawn the attention of all political parties and their candidates in the state to the Executive Order 21 prohibiting use of public schools for rallies without permission from the State Commissioner of Education.

Wike in a state-wide broadcast, drew the attention of all political parties and their candidates to the Executive Order 21. The Order requires a permission from the commissioner of education not less than two weeks before the date of the rally in a public school and payment of non-refundable security fee of N5,000,000.00.

In Kaduna State recently, unidentified men invaded and disrupted the rally of the Peoples Democratic Party (PDP). Videos from the scene showed thugs beating people who had gathered for the event. The presidential candidate of the party, Atiku Abubakar took to his social media page to condemn the act. He described it as undemocratic and against the peace accord signed.

Concerned about the rising attacks and destruction of posters and billboards belonging to opposition political parties in some states, the police have warned governing parties and persons perpetrating the act to desist from doing so or face arrest and prosecution. The Force Public Relations Officer, Muyiwa Adejobi, pointed out that defacing posters and destroying billboards were criminal. He called on candidates and political parties to rein in their supporters.

Also, the National Peace Committee said the conduct of some political actors had been disappointing. In a release signed by its chairman, General Abdusalami Abubakar (rtd), the convener, Bishop Matthew Kukah, and head of secretariat, Dr Atta Barkindo, the committee called for a level playing field for all parties in the course of the campaigns.

It is as a result of the undemocratic postures by some state governors and their agents that the Independent National Electoral Commission (INEC) has condemned such practice, saying it is ready to penalise states in which such incidents are recorded. According to INEC, all parties participating in the 2023 general elections are free to campaign in all the 36 states of the federation. The chief press secretary to INEC chairman, Mr Rotimi Oyekanmi said, “It is against the law for a state government to prevent any political party from campaigning during this period. Section 95(2) of the Electoral Act 2022 makes it very clear that state apparatus including the media shall not be employed to the advantage or disadvantage of any political party or candidate at any election.”

The INEC, security agencies and President Muhammadu Buhari who has promised to leave a legacy of electoral transparency should call the governors to order before they destroy our democracy.