Ndufu-Alike, The lecturers at the Alex-Ekwueme Federal University Ndufu-Alike Ikwo (AEFUNAI) in Ebonyi said the body would resist any attempt to ridicule university academics through casualisation.

The lecturers, therefore, appealed to stakeholders to prevail upon Federal Government (FG) to avoid engaging in any activity that could plunge the nation’s public university system into another needless strike.

The lecturers under the aegis of Academic Staff Union universities (ASUU) appealed for a peaceful protest staged on the university premises on Wednesday.

Dr Egwu Ogugua, the AEFUNAI-ASUU chairperson while addressing members during the protest regretted that the FG instead of addressing the issues that led to lecturers embarking on eight months’ strike chose to pay them half salaries in October.

He said that the ASUU strike which lasted for eight months was suspended based on the intervention of Mr Femi Gbajabiamila, Speaker of the House of Representatives and the court order.

“Ladies and gentlemen, recall that on October 14, ASUU decided to suspend their eight-month strike following the intervention of Speaker Femi Gbajabiamila and course, the Appeal Court ruling ordering us to go back to work.

“It is important for the world to know that since the said intervention and the court order, the FG, having not paid lecturers for eight months decided to casualise intellectuals by prorating our October salaries.

“We, the members of ASUU, AEFUNAI branch, therefore, reject in totality, this alien casualisation of intellectuals demeaning the centrality of the ivory towers in Nigeria and insulting the sensibilities of the intelligentsia.

“We use this opportunity to appeal to well-meaning Nigerians and various stakeholders, religious leaders; traditional rulers, parents, students, to prevail on the FG not to further desecrate the sanctity of the future of our children,” he said.

Ogugua said that it had become obvious that the federal government following the shabby treatment of lecturers did not place the education sector among high-priority areas.

He lamented that the federal government’s decision to place university lecturers on pro-rata amounted to a declaration of war on the entire public university system.

“Yes, we were in the trenches for eight months – February 14 to October 14, now that we are back, we are duty-bound to complete teaching for the backlog of academic semesters and sessions lost due to the strike.

“The word ‘lost’ does not entail a permanent loss because most agents of the federal government have consistently believed in the alternative truth that the lost semesters have been lost permanently. 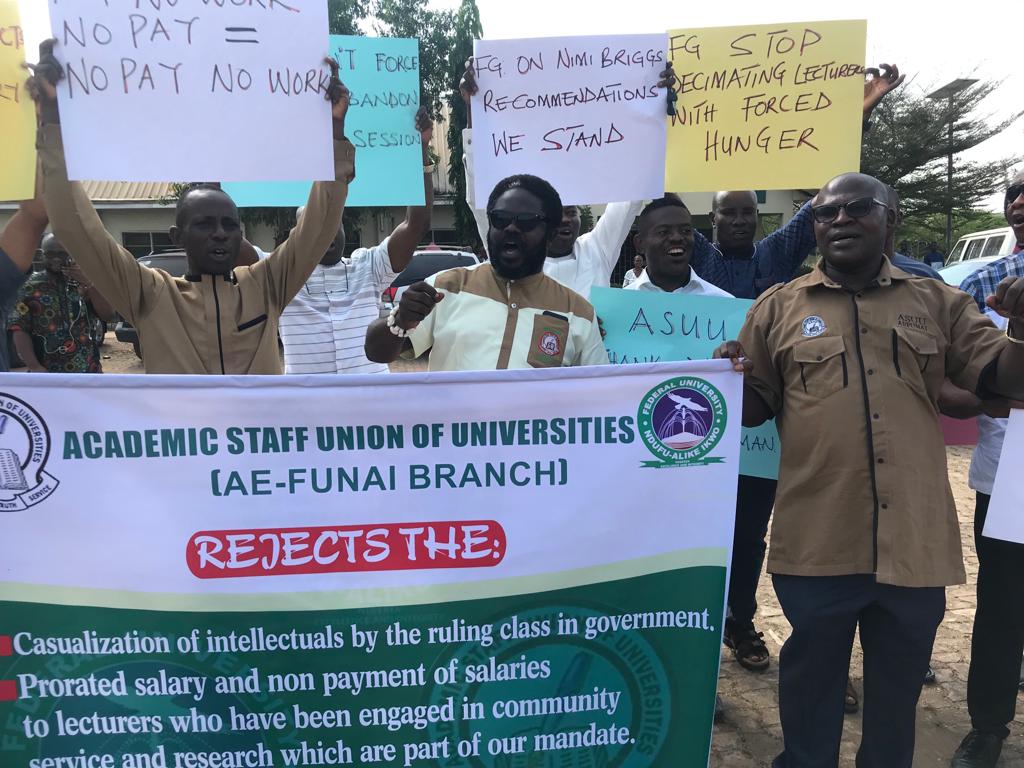 “In our university, following the suspension of the strike action, we have almost concluded the remaining first semester of the 2021/2022 academic session.

” We are under enormous pressure to complete the whole session before April and commence the 2022/2023 session.

“From the foregoing, it is wicked for FG to insist on withholding the arrears of our salaries not to talk of prorating the October salaries.

“It is worthy to note that the recently released November, salaries have recorded a high degree of deductions.

“As a people, we shall not keep quiet and we shall continue to scream like the voice in the wilderness for the survival of the public university system in Nigeria.

“If the body of intellects is shabbily treated, then we can sing to the rooftops that the FG indeed, has no regard for education,” he added.