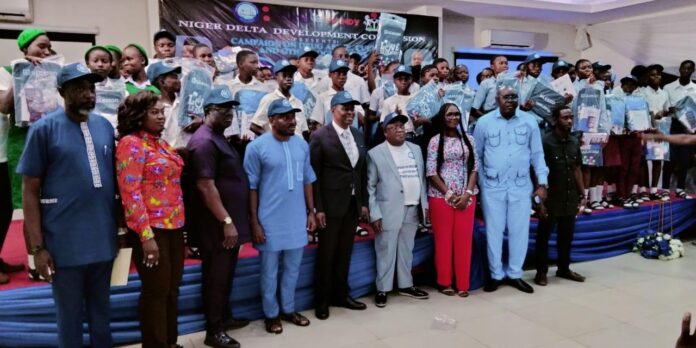 The Niger Delta Development Commission (NDDC) on Wednesday intensified its campaign across the Niger Delta  to end cultism and drug abuse among youths as part of efforts to sustain the peace in the region.

The Acting Managing Director, NDDC, Emmanuel Audu-Ohwavborua, led officials of the commission to Yenagoa, where they sensitised students drawn from various secondary schools in the state on the dangers of cultism, drug abuse and other social vices.

The NDDC also distributed educational tabs configured with one year subscriptions and smart school bags to the students.

Audu-Ohwavborua, who was represented by the NDDC Director of Youths and Sports, Offiong Ephraim, at the one-day seminar tagged, “The Dangers of Drug Abuse and Cultism”, said apart from illicit drugs, students should abstain from taking drugs without prescriptions from medical experts.

Audu-Ohwavborua said there was a correlation between drug abuse and cultism stressing  that secret cult members were always induced by drugs to engage in social vices.

He said: “We have had a problem in this country, not just in this country, as a whole, about drugs and drug abuse. So it is always good to see a medical practitioner or a doctor before you consume anything into your body.

“But the one we feel concerned about is the use of illicit, illegal and all kinds of drugs. We saw that even the students are more compelled to do that than even adults.

“We have come to discover that even in secondary schools now, some of you, I don’t know where you copy those things from, try to sniff all kinds of things you see. Of what use is that going to be to you? It is definitely going to destroy you.

“We discovered that most members of one cult or the other are people that are taking drugs because it is believed that maybe the drugs will make them high, there are some things you might not ordinarily do but the moment you become high, you probably didn’t even know yourself again and you indulge in various nefarious activities.”

The Bayelsa State Director of the NDDC, Theophilus Alagoa, harped on the need for students and others to avoid self-medication, saying it could lead to their untimely death.

He said: “Some of us are taking it. We may even be taking supplements without prescriptions. It is a serious matter”.

Speaking during the panel discussion, the Special Adviser to the NDDC boss on Youths and Sports, Udengs Eradiri, said the programme was designed to cover the nine states of the Niger Delta.

Eradiri said the event offered a unique opportunity to educate the youths about the ills of drug abuse and cultism, catching them young from secondary schools.

He said as an interventionist agency, it was the responsibility of the NDDC to develop and prepare the young ones for  better future and help them to avoid distractions associated with  joining bad gangs.

He encouraged the students to spend their time on the educational tabs and warned them against selling the e-learning equipment.

Eradiri said: “These are going to be the young ambassadors of the NDDC to cause positive change in the society. They will talk to their colleagues on the dangers of drug abuse and cultism.

“The tabs we have given to them are e-learning tabs that have been subscribed for one year covering a wide range of courses that will help develop and expand their knowledge. We want them to invest their time on their studies and through this process resist societal pressures.

“We are using them as a point of contact to other young people in communities. You can see the spread, schools from various local governments, and interior communities have been invited. Youth today in Nigeria is from the ages of 15 to 29 years and this is where secondary school, young people fall into the category.

“We are going to be doing sports programmes to harness the capacities within this age range. Energies of these young people must be put into productive means and that is our responsibility as NDDC to reach out to the young people.”

One of the students,  Ayoletegite Ebikiemmo, from the Government Girls Secondary School Nembe promised  to educate her colleagues on the dangers of cultism and illicit drugs.

“I really feel great about the programme because it is a great opportunity that NDDC is using to impact the knowledge that drug abuse and cultism is not good. I am very glad that I have the privilege to be here. So I am very happy and I appreciate the NDDC”, she said.

Also, Dressman Ebipere, from the Community Secondary School Okoloba said he had been thought how to flee from cultism and hard drugs.

He said: “Cultism is bad and has the capacity to destroy my future. It can affect me  mentally, socially, psychologically and physically. Their operations and meetings are done in secret and I have learnt that I should avoid such dangerous groups”