HomeNational Museum of Unity Land in Enugu not for sale, says Commission
Featured

National Museum of Unity Land in Enugu not for sale, says Commission 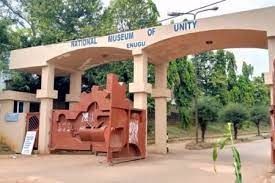 The National Commission for Museums and Monuments on Thursday dismissed as false,  alleged plans by the commission to out rightly sell some plots of land at the National Museum of Unity Complex, Enugu, the Enugu state capital, saying that the land in question is on ‘concessionary lease’ to Avaco Construction and Logistics Limited.

Addressing journalists in Enugu, the Curator of National Museum of Unity, Enugu, Mr. Alloysius Nduka Duru, revealed that the commission had earlier rebuffed attempts  by some  unnamed highly placed individuals to possess some plots of land in the museum,  emphasising that the National Museum of Unity, Enugu, remains the property of the federal government.

SummitNews recalls that a group, the Organisation for the Protection of Culture and Arte-fact (OPOCA), recently petitioned President Muhammadu Buhari, the Federal and State Ministries of Culture and Tourism, DG NCMM, Enugu State Government, and concerned stakeholders in arts and culture, alleging plans by the federal government to sell some portions of land at the National Museum of Unity, Enugu.

“…there is no outright sale of any museum land in Enugu, but a concessionary lease.  There is nowhere in the world where museum land or conservation parks are outrightly sold; anyone patronizing such venture is bound to lose,” said Duru.

He  explained that paucity of funds had for long prevented the Commission from building and developing the necessary infrastructures needed in the museum for optimal operations.

According to him, such infrastructures include amphi-threatre, museum kitchen, craft centre, auditorium, and children’s park, adding that some portions of land had already been mapped out in the museum for the erection of those projects.

The curator further explained that amid the lack of funds to put in place those necessary infrastructures in the complex, the  Commission’s Director-General Prof. Abba Isa Tijani, approached the Infrastructures Concessionary and Regulatory Commission (ICRC), to attract investors to build those projects that are unavailable in the complex.

“In the effort to forestall the loss of the land, the Director General sought the help of ICRC.  Prospective investors submitted their proposals which were thoroughly scrutinized and subjected to rigorous studies by the ICRC so that the federal government has value for money.

“Avaco Construction and Logistics Limited scaled the ICRC scrutiny, and were awarded the project,”  which according to Duru will cost about N2.9 billion.

“The project comprises:  the development and erection of infrastructure needed by the museum such as amphi theatre, museum kitchen, craft centre, children’s park, halls etc.

“The investor will fund the project and has to deliver them to the museum within 18 months.

“A part of the land appropriate to the amount invested will be given to the investor to invest on, on a concession spanning 25 years, and is renewable for further subsequent terms of 25 years.

“The leased or concessed part of the land and structures therein will revert to the museum after the expiration of the lease,” Duru explained.

He enumerated the potential benefits accruable to the federal government following the transaction to include getting the needed infrastructure for operational needs of the museum without recourse to borrowing, creation of more economic opportunity for job creation, and provision of skill acquisition centre for empowement of the youths.a

Meanwhile, about five hundred traders who have stalls in the museum complex say that the construction of the projects will put them out of business as their stalls have already been marked for demolition.

The traders who are mainly retired staff of the commission told SummitNews that they acquired their stalls legally, and have been paying rents to the commission.

According to Nze Kingsley Ezeyim, who retired from the commission as assistant director, the affected traders ought to have been involved in the discussions leading to the award of the contract.

He described the one month notice given to the traders to relocate as untenable.

However, Mr. Duru assured the traders who were ex-staff of the commission that they would be given an opportunity to pick and pay for the  shop of their choice when the project is completed.

“It is pathetic, inhuman, unjust and wickedness of the highest order in this moment of hyperinflation and many businesses closing down because of the harsh economic realities, yet here in our country Nigeria, the federal government in collaboration with some land grabbers in the state seems to be on the path to make life harder for her citizens by planning to sell the only remaining space and demolished shops worth millions of Naira inside the National Museum Complex (where more than 1000 artisans make their living,” alleges OPOCA.