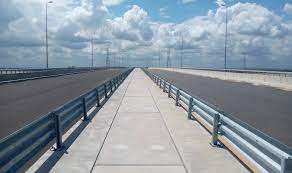 The Federal Government on Thursday disclosed that the Second Niger Bridge will only be open to traffic from December 15, 2022, to January 15, 2023.

Minister of Works and Housing, Babatunde Fashola (SAN), made this known while answering questions from journalists in Abuja on Thursday.

The minister said the Federal Government is taking the measure to relieve pressure from the bridge currently used for the Christmas festivities.

He said that even though the construction of the bridge has been completed, work is still ongoing on the road linking the bridge to the major highway.

“What delayed us is rain and the stop work orders on Mondays in that part of the country.

“The President approved that since the bridge is finished that we should create a access road so that during Christmas you can begin to experience what it would feel like plying the bridge.

“Let me be clear again: we haven’t finished construction work but we would open it for people to use to relive the pressure from the one bridge, it wouldn’t be available for heavy duty trucks, it would only be small vehicles for now until we finish our work.

“On the 15th January we would reverse that movement for those coming from the east to the west. We have told all the contractors that they shouldn’t open anymore sections for construction i.e. there shouldn’t be any barrier on the roads this season.”