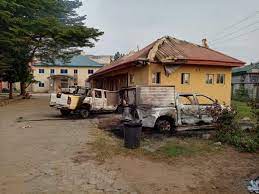 Governor Hope Uzodimma of Imo State on Monday condemned the incessant attacks on offices of the Independent National Electoral Commission (INEC) in the state, describing them as “politically contrived”.

The governor made the comment at the Imo Police Command Headquarters in Owerri in the aftermath of an attack on the INEC headquarters in the South-East state which led to five deaths.

“If we collaborate this with the events of the past, we have continuously said that what is happening in Imo State is politically contrived,” he said while addressing the press after the visit.

“Some people think that they can win the election yet they don’t want the election. How would they now win?”

With less than three months to the general elections, Governor Uzodimma described the attacks as a distraction to the electoral body.

Three of the attackers were killed while two police officers died in the incident.

“The attack affected the part of the building occupied by the Election and Party Monitoring (EPM) Department and one official utility vehicle (a Toyota Hilux pickup van) were burnt,” INEC’s National Commissioner Festus Okoye said in a statement hours after the incident.

“The response of the security and emergency services (the Fire Service) curtailed further damage to the building and other assets of the Commission. No critical election materials were destroyed. There were also no casualties involving staff of the Commission.

“This is the third attack on the Commission’s facilities in Imo State in less than two weeks following the earlier attacks on our Orlu LGA office on Thursday 1st December 2022 and Oru West LGA office on Sunday 4th December 2022.”

The incident, which happened as voters begin the collection of Permanent Voters’ Cards (PVCs) ahead of the 2023 general election, INEC said, is systematic.