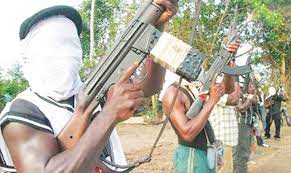 Commercial, social and economic activities in Abakaliki, capital of Ebonyi state, were on Monday temporarily disrupted as suspected gunmen attacked some parts of the metropolis.

The gunmen were allegedly enforcing the five-day sit-at-home declared by a faction of the Indigenous Peoples of Biafra (IPOB), led by Mr. Simon Ekpa.

The alleged attack on the capital city forced shops and other business activities to a temporary halt while human and vehicular movements were brought to a standstill.

Our correspondent reports that residents of Abakaliki were also thrown into panic as people scampered for safety as the suspected gunmen carried out operations in various parts of the city.

The gunmen allegedly set a shop belonging to a woman ablaze at a popular local market, Afia Ofuu, on the Enugu-Abakaliki expressway.

The suspected gunmen it was gathered also visited the popular rice mill in Abakaliki and shot severally in the air for some time, forcing traders and their customers to scamper for safety, and forcing the day’s business to end abruptly.

A similar chaotic situation was observed at Udensi Road Round-About close to the Old Government House and the State Police Command Headquarters.

Motorists  scampered for safety with many cases of accidents recorded as they tried to flee from the gunmen who were said to have shot many times in the air.

At the Ebebe Junction, Abakaliki, it was a similar situation as road users all ran in different directions while shop owners were forced to close down their shops following reports of gunmen attacks in the town.

Our finds revealed that banks, filling stations, and government offices closed abruptly while many workers and business owners who had gone to transact the day’s business were forced to return home or had found a safe place for shelter.

Following the security situation, there was an increase in police patrol in various parts of the town which was complemented by the Ebubeagu security outfit.

Reacting to the development, Mr. Chris Anyanwu, Police Public Relations Officer (PPRO), Ebonyi Command, blamed the panic witnessed in the city on rumours by unscrupulous people, insisting there was no insecurity or shootings in the town.

“There was no insecurity or shooting in any part of Abakaliki; the panic was due to rumour by unscrupulous people, the capital city is well secured and security personnel are on high alert to provide security to the citizenry,” Anyanwu said.