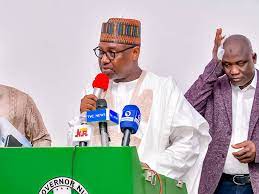 Gov. Sani Bello: “We have a responsibility to deliver on our mandate to the people…”

Governor Abubakar Sani Bello, of Niger State has sworn- in the 25 newly elected local government council chairmen with a call to take leadership seriously and make positive impact in the lives of the people at the grassroots.

The swearing-in ceremony took  place at the Government House, Minna, the state capital, and the oath of office was administered by the Chief Judge, who was represented by Justice Zainab Sadat of High Court V.

While congratulating the chairmen, the governor said that meeting up with the people’s mandate is sacrosanct.

“One thing that remains sacrosanct is the fact that we have a responsibility to deliver on our mandate to the people especially now that we are approaching the general elections. ” He added.

Governor Sani Bello  urged the local government chairmen to also pay attention to the issue of security in their various local government areas by evolving new strategies in information and intelligence gathering.

He also charged them to be proactive and create more streams of revenue earnings in their local government areas as well as shun corruption.

In his remarks, the Commissioner for Local Government and Chieftaincy Affairs, Alhaji Kabiru Abbas, appreciated the Governor and the State Electoral Umpire for providing a level playing ground as well as conducting a free, fair, and successful local government election.

Some of the chairmen interviewed expressed happiness and promised to initiate ideas that would bring the needed development in their various local government areas.

With the inauguration, the Council Chairmen are expected to be at the helm of affairs in their respective local government councils for the next three years.

Recall, the council election was conducted by the Niger Independent Electoral Commission (NSIEC) on November 10, 2022.