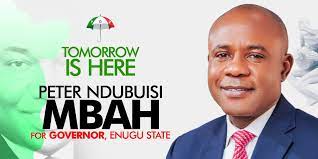 One of the phenomenal experiences of the 21st Century is the impact of social media on almost every aspect of our national life. But it is unfortunate that some misguided members of the society have continually hidden under the anonymity of this virtual world to peddle sheer falsehood and utter malicious content.

Enugu State is not immune to this malaise. In the last few months especially since the beginning of campaigns for the forthcoming elections, those who ought to have known better, have sought to revile the prevailing civility in the state and drag the hard-earned reputation of Enugu’s illustrious sons to the mud of public obloquy.

Lately, the state has been inundated with clearly malicious jingles and sundry content conceived with the devious intent to malign the reputation of our governorship candidate, Dr. Peter Ndubuisi Mbah. Despite the disingenuous attempt to mask the identity of the purveyors, it is not difficult to deduce the source of these slanderous messages.

We are not in the least surprised by such discovery, as the messages are in sync with the characters of the linchpins whose political careers are typified by mudslinging. Whereas most of these pretenders have no record of success in any previous endeavor, they are wont to rate any other person’s successes from the warped prism of their serial failings, after all, it is often typical of scoundrels to assume that their enemies are the enemies of God!

Rather than devote efforts to enunciate a functional blueprint, or nurture their tarnished reputations, these besmirched opposition elements have chosen, quite ironically, to contrive a campaign of calumny against someone who, by his sheer dint of hard work and revolutionary ideas, has been able, through the Pinnacle Oil success story, to give Enugu State a salient definition in the national map of entrepreneurship, thus underscoring that we are also blessed with men of distinct abilities.

See also  2023 GOVERNORSHIP ELECTION IN ENUGU: THE DILEMMA OF VOTERS - BY CALLISTUS EBUE

Such dirty ploy is reflective of the Socratic saying that slander becomes the tool of the loser when the debate is lost! Yet, the PDP Campaign Organization would like to emphasize that slander is never permissible in any society governed by the rule of law.

Indeed, it is gratifying to note that the Enugu State governor, Rt. Hon. Ifeanyi Ugwuanyi, has enthroned an enabling environment characterized by restraint even in the face of brazen provocation.

Such unrestrained freedom, we all know, is not guaranteed in some states around Enugu. These purveyors of falsehood know this too well. Fortunately, such lies can only titillate a few. The larger section of the electorate would rather be treated to engaging debates and ennobling campaigns.

This is what our candidate has been carrying out through his numerous town hall meetings across the state.

We hereby note that whereas the Nigerian constitution guarantees an array of freedoms, including rights of expression, it does not translate to a right to deliberately impugn people’s reputation.

We, therefore, hereby call on the law enforcement agencies to dig deep and bring to law all those who have by these incendiary messages gone beyond the threshold of law and decency.

It is also pertinent to restate that while we may have chosen to go high as they consciously plunge lower to depths of depravity, we are not averse to seeking legal redress when the line of decency is breached as presently obtains.