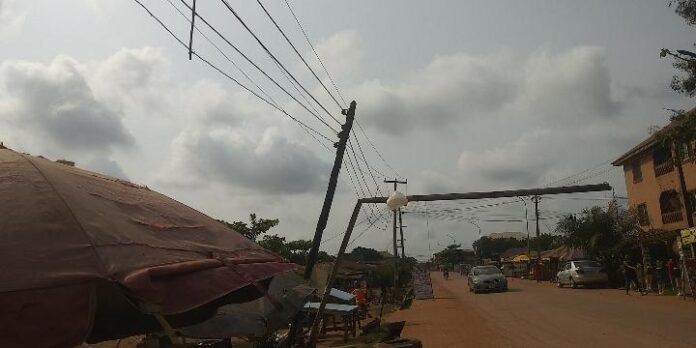 Business activities have been paralyzed for more than two years in the Odunukwe area of Abakaliki, the Ebonyi State capital, following a system collapse of the Enugu Electricity Distribution Company, EEDC  in the area.

SummitNews gathered that residents of the area, numbering over one hundred and twenty residential houses and shops currently pay through their nose, to make ends meet as commercial activities had been badly affected by the continued non-supply of power.

A resident of the area, Mr. Nobert Okorie, told our correspondent in Abakaliki that efforts of the people to attract the attention of the Ebonyi State Government and authorities of the EEDC, had often met the brick walls.

Mr. Okorie, a POS operator said that Odunukwe which connects the popular Hatchery Road and also leads to the Ebonyi State House of Assembly, has become a fertile ground for all sorts of criminal activities at nights.

Another resident who preferred anonymity, told Summitnews that when hoodlums vandalized the EEDC installations in the area and cut them off from public power supply, the people were compelled by the electricity distribution company to contribute money for the purchase of a new cable and also for the construction of a transformer protection post.

“I am telling you what you can go and verify, the source said. We even signed an undertaking with the EEDC, to take responsibility of protecting the transformer.”

He said that effort is being made to fix the Anyim Ude Transformer in the area, which was vandalized by hoodlums, two years ago and appealed to residents to exercise a little more patience.

“My brother, the Anyim Ude Transformer which is serving the areas in question was vandalized. However, effort is being made to fix it and restore supply to the area. We sincerely apologise for the inconveniences this has caused our customers affected by this development,”  he emphasised.