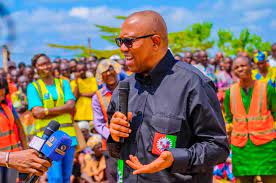 The presidential candidate of the Labour Party (LP) Peter Obi, has told supporters to hold him accountable.

He made the comment in Port Harcourt, Rivers State during a campaign rally on Thursday, asking them to take a record of his promises.

“When we come to a rally, please, put your phone on and listen to what we are promising. Tape it (put it on record) so that tomorrow when we start telling you that they manipulated us, you can push us out,” he told the crowd at the Liberation Stadium.

According to the former Anambra State governor, elected public officeholders don’t have to give excuses for their inability to fulfill their promises.

At the event, the musical duo of Peter and Paul better known as P-Square thrilled the crowd.

After the rally, Obi, who was accompanied by his wife Margaret and other party top shots, embarked on a road walk. A chieftain of the LP Pat Utomi said the move was to show the party’s candidate is in touch with the people.

“It is about a 10km (walk) [We are] talking to the people; shaking hands, holding babies, and feeling the people,” he added.

“We challenge every other person who is running to come and do the same. Touch the people, feel the people and serve the people.”

Before the rally, Obi had met with young people and he promised them an all-inclusive government if he is elected as Nigeria’s leader next year.

Aside from youths, the former governor met with traditional rulers in the state and re-echoed his plans for the nation.

While critics say Obi does not have the “structure” to challenge the two major parties – the ruling All Progressives Congress (APC) and the main opposition Peoples Democratic Party (PDP) – the LP maintains that millions of poor people across the country make up his support base.

Obi enjoys strong support from youths who make up a chunk of Nigeria’s voting population. He, however, faces stiff opposition from APC’s Bola Tinubu and Atiku Abubakar of the PDP among others.