Niger State Governor hails cabinet members, others over celebrating him @ 55 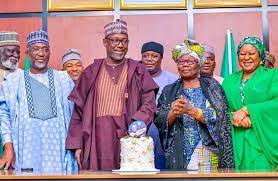 Gov. Sani Bello (third from right) flanked by cabinet members during the cutting of the birthday cake

Governor Abubakar Sani Bello, of Niger State has expressed his heartfelt gratitude to all who have contributed to the success of his administration since its inception.

The Governor gave the appreciation after members of his cabinet organized a mini celebration for him to commemorate his 55th birthday immediately after the weekly state council meeting, the last for the year 2022 at the Government House, Minna.

According to him, “this celebration is better late than never. I must express my appreciation to you all for your support, I must thank the Gwape cultural troupe for the entertainment, the cabinet secretariat for the hard work, my security personnel for protecting me, the chief of staff, my cook, my drivers, the press, and protocol. I appreciate you all and God bless.”

The Chief Organizer of the celebration who is also the Commissioner for Tourism and Culture, Mrs. Rifkatu Adamu Chidawa, said the Governor was worth celebrating, citing the sterling leadership he is providing not only in the council, but also in the entire state.

The Commissioner also described him as a leader with a listening ear and hardworking.

She explained that the celebration came three days after governor’s birthday because he was absent from the state on an official engagement outside the country.

The Commissioner said, “we want to celebrate his hard work, his input, and selflessness”.

The highlight of the brief celebration was the cutting of the birthday cake and dance by the celebrant and his cabinet members.