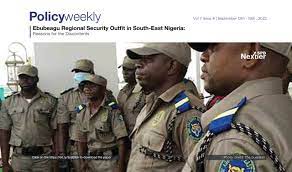 A 39-year-old man, one Mr Eseni Egwu, a police officer and another person has been confirmed dead in Ekoli Edda, Afikpo South Local Government Area of Ebonyi State following a bloody clash between thugs loyal to a party stalwart in the area and operatives of Ebubeagu Security Network.

It was gathered that the operatives of the Ebubeagu Security Network accompanied the State Chairman of the All Progressives Congress APC who is also the State Security Consultant, Chief Stanley Emegha to his country home for Christmas celebration.

LEADERSHIP gathered that trouble started when members of the Ebebeagu Security Outfit allegedly arrived the market square in the area in company of Chief Emegha drove round the market and started shooting shot into the air and later zoomed off.

A source who spoke to LEADERSHIP on grounds of anonymity said that the shooting angered the thugs who sees the action of the security network as intimidation and harassment which later prompted the elders of the community to order non natives to leave the community.

It was gathered that in a bid to enforce the directive of the elders of the community, the members of Ebubeagu Security Network who resumed shooting when the thugs made attempt to chase the non natives out of the community allegedly shot and killed Mr. Egwu.

The incident according to the source occurred at about 6pm yesterday

The thugs were said to have regrouped few hours after the death of Egwu and proceeded to the country home of Chief Emegha at Ekoli Edda Community at about 10.18pm and razed his building.

A resident of the community who also spoke on grounds of anonymity said that the outcome of a youth election in the community didn’t go down well with the APC State Chairman Okoro-Emegha who reportedly drew the attention of the new council area chairman, Chima Ekumankama, who subsequently cancelled the election.

It was gathered that the Council boss also disbanded the group.

Reacting to the development, Chief Emegha, said he was attacked by thugs loyal to a politician in the area, saying his house had equally been burnt by the miscreants.

“Yes. It’s true. They attacked me last night at Ekoli Edda community, and the same people, some of whom I know, I have just heard, burnt my house.

The elder brother of the deceased, Mr. Mission Egwu expressed the regret over the death of his sibling’s describing the killing as senseless and premeditated.

He maintained that the community has been lockdown as a result of the crisis in the area.

What happened in Ekoli Edda today is an unfortunate and senseless killing. It is unfortunate in the sense that the life of a vibrant young man in active community service has been cut short. It is senseless that there was no provocation for his killing.