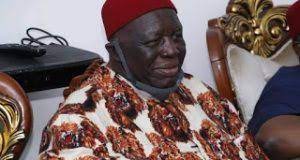 The former National Chairman of All Progressives Grand Alliance (APGA) Chief Chekwas Okorie, has expressed profound sadness over the death of Professor George Obiozor, who until his death on Monday, was the President General of Ohanaeze Worldwide, the apex Igbo socio-cultural organisation.

Chief Okorie who was both the founding national chairman of APGA and the United Progressives Party (UPP) in a statement on Thursday, described late Prof. Obiozor as an advocate of a united Nigeria where justice, equity and fairness reigned supreme, adding that he would be greatly missed by all Nigerians, the diplomatic community and Ndigbo.

The statement made availabe to SummitNews reads:  “I am greatly saddened by the death of Ambassador Professor George Obiozor, the highly respected President General of Ohanaeze Worldwide.

“His death has left a huge void in the leadership of Ohanaeze.

“He brought incomparable intellectual depth, maturity, forthrightness, courage and diplomatic savvy to bear in his leadership of Ohanaeze.

“Ndigbo are by their very nature highly critical and republican. Our expectations from our leaders are usually high. Professor Obiozor excelled and delivered on his mandate excellently.

“When it was the turn of Imo State to occupy the exalted office of the President General of Ohanaeze Ndigbo Worldwide, the State presented an array of highly qualified persons that made the contest keen and very competitive.

“When all factors were considered Professor George Obiozor, emerged the undisputed choice of overwhelming majority of the large and unprecedented delegates of Ohanaeze leaders from the 36 States of Nigeria, the Federal Capital Territory and the Diaspora Igbo leadership.

“Professor Obiozor spoke truth to power and was a strong advocate of a united Nigeria where justice, equity and fairness will reign supreme.

“The cold hand of death cut short the tenure Professor George Obiozor, as the President General of Ohanaeze Ndigbo Worldwide.

“He will be greatly missed by Nigerias, the Diplomatic Community and Ndigbo in particular.

“May his noble soul rest in peace.”