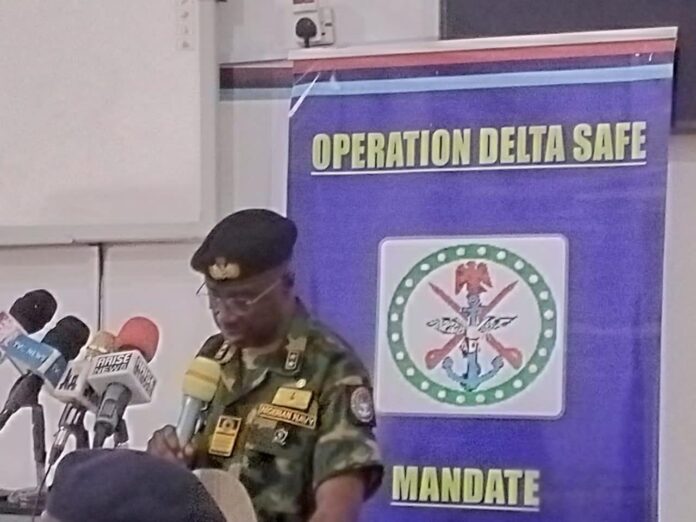 The Joint Task Force (JTF) in the Niger Delta Operation Delta Safe, says it arrested 699 suspects for complicity in oil theft, pipeline vandalism and sundry crimes in the outgoing year 2022.

Commander of the joint military force, Rear Admiral Aminu Hassan, made this known on Friday in Yenagoa while briefing Journalists on its activities and achievements for the outgoing year.

Hassan explained that some 1,800 illegal oil refining sites and 37 militants/sea robbery camps were destroyed in the Niger Delta region while seven suspects arrested for possession of firearms were paraded.

The Commander said the JTF conducted several operations in the outgoing year to ensure safe and peaceful operation of the oil and gas industry in the Niger Delta region as well as safeguard the people of the area.

According to Hassan, these include protection of oil and gas facilities, anti crude oil theft operations, clearance of militants and sea pirates’ camp and non kinetic conflicts resolution.

While appreciating the support from the Federal Government, the Defence Headquarters, Service Chiefs, other security agencies and stakeholders including the Media for the successes recorded, he stated that the JTF resolved about 188 disputes involving multinational oil companies and host communities through the Civil Military relations and mediation efforts.

Chairman of the Bayelsa Maritime Union, Mr. Ogoniba Ipigansi assured that the unions would cooperate with the security outfit.