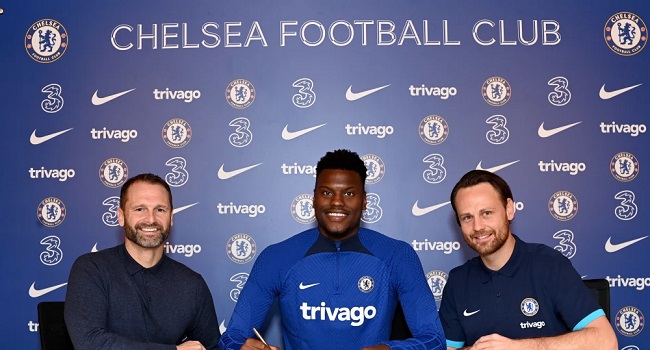 Badiashile at the unveiling at Chelsea.

Benoit Badiashile has signed a seven-and-a-half-year contract at Chelsea, completing a permanent transfer to Stamford Bridge from AS Monaco.

The central defender has been a regular in Ligue 1 for the past five seasons and recently made his senior debut for France, having represented Les Bleus all the way up from Under-16 level.

Following his move the French defender said, “I’m very happy to be here at Chelsea. I’m so excited to start playing for this club. I can’t wait to see the fans and start playing in the best league in the world.”

Despite the fact he only turns 22 in March, Badiashile already boasts significant experience in the French top flight and in Europe, where he has featured in the Champions League and Europa League for Monaco, amassing almost 150 appearances in all competitions to date.

At 6ft 4in, Badiashile is a dominant defender in the air but equally comfortable with the ball at his feet, capable of playing short passes out from the back or switching the play with longer diagonals. His blistering speed is a key attribute and he has experience in both a back four and back three at club level.

He earned a regular place as Monaco’s left-sided centre-back while still a teenager and was handed his international debut by Didier Deschamps back in September aged just 21, a reward for his prominent role in back-to-back third-place finishes for the Principality side in Ligue 1.

Chelsea Chairman Todd Boehly and co-controlling owner Behdad Eghbali said, “We’re delighted to welcome Benoit to Chelsea. He’s an excellent young player who has quickly established a strong reputation for himself and has a huge amount of experience for his young age. We are sure he will form an important part of our team in the years ahead.”