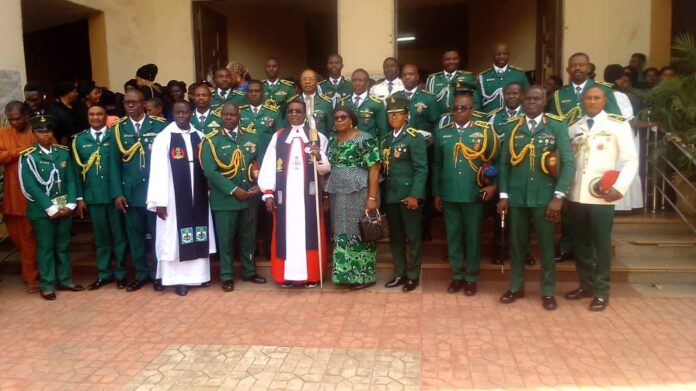 Chukwuma gave the task on Sunday while delivering his homily at the Thanksgiving Service to mark 2023 Armed Forces Remembrance Week at the Cathedral Church of the Good Shepherd, Enugu.

The cleric noted that it took the Nigeria military three years to end the civil war, but Boko Haram war had lingered longer, and with its negative consequences to the country.

According to him, we have lost fighting men, whose wives are widows today; we have lost huge resources and our people are displaced in large numbers due to Boko Haram war.

“Today, insurgency, armed bandits and other forms of negative elements have continued to disturb various parts of the country; thus, making the people to feel insecure in their localities.

“Corruption among politicians and public office holders remain in the increase and they are stealing in mind blowing manner.

“Added to all these is the recent oil theft that nearly brought government earnings to zero and subjected the country and her government to keep borrowing to remain afloat.

“In all these, I sincerely believe the Federal Government through our gallant military and exercising the will-power can win and end all these wars if we are committed and sincere to deal with them head long,” he said.

Chukwuma noted that Nigerians wanted rest and peace from the myriad of challenges that had confronted them all these years.

“This is why we are earnestly praying and calling for a New Nigeria, where Nigerians will feel secured and call it their home.

“The forthcoming general elections remains critical to achieve this and returning the nation back to its lost glory,” he said.

The archbishop, however, urged politicians to live exemplary lives like late Dr. Nnamdi Azikiwe and other first generation politicians did.

On the South-East, the cleric urged the Armed Forces, including the police and NSCDC, to end the retrogressive Monday Sit-at-Home in the region.

“It is rather unfortunate that few hoodlums hold the entire region to ransom, even when the leader of the Biafra struggle had directed that it should be abolished.

“The people needed the armed forces to come out en mass and patrol the streets on Mondays and the people will regain the courage once more and before you know it Sit-at-Home will stop,” he said.

Chukwuma, however, congratulated the Nigerian Legion, serving personnel of the armed forces, their wives as well as widows of fallen heros for all their sacrifices to the nation.

Speaking, Maj.-Gen. Umar Musa, the General Officer Commanding (GOC) 82 Division, Enugu, said that “the thanksgiving service is necessary to remember our fallen heros, who fought gallant and paid the ultimate sacrifice for the country”.

Musa, who was represented by Brig.-Gen. James Bambur, urged the serving officers and men to continue to serve selflessly with dedication and patriotism.

“Those we are remembering today have served gallantly and left; and I pray that we currently in service will serve and one day we leave the stage for others,” he said.

Dr Emeka Igwesi, the Assistant Commandant General (ACG) of Nigerian Legion, Enugu State, said that the thanksgiving was to appreciate God for His mercies towards the fallen heros, living heros, widows of fallen heros, their children and serving armed forces personnel.

“Sincerely speaking, the Federal Government has being paying the pension of retired armed forces personnel as when due without any hitch. We must commend President Muhammadu Buhari, for this feat,” he said.