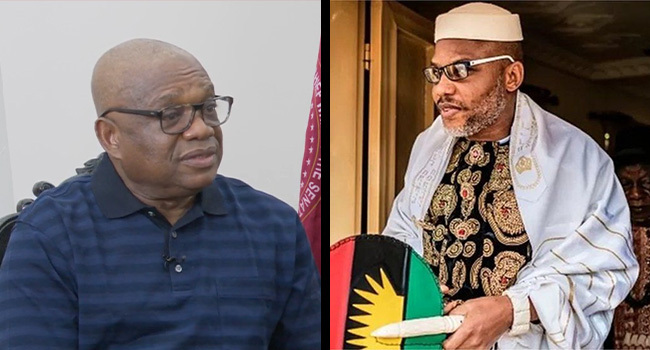 The Chief Whip of the Senate, Orji Kalu says he will stand as surety for the detained leader of the proscribed Indigenous People of Biafra (IPOB), Nnamdi Kanu if granted bail again.

“I will stand surety for him (Kanu) if the Federal Government wants to release him to me,” Kalu said on Channels Television’s Political Paradigm programme aired on Tuesday.

Kalu, a former governor of Abia State, also believed the Federal Government will respect the next court judgement on the bail of the embattled IPOB leader.

The federal lawmaker said he is close to the family of Kanu in the Afaraukwu Ibeku area of Abia but the IPOB leader and his family did not listen to his counsel.

He, however, said he won’t abandon the family during their prolonged predicament with the Federal Government.

“I made his father the traditional ruler of their place when I was governor. I’m close to them but they didn’t listen to me but that will not make him to abandon them. I will not abandon them,” said the chieftain of the All Progressives Congress (APC).

“I will stand surety for him if the Federal Government wants to release him to me. And I can keep him in my compound here in Abuja or Igbere (in Abia) and counsel him.”

Legal Fireworks
Senate Minority Leader, Enyinnaya Abaribe and two others had stood as sureties for Kanu before he was granted bail by the Federal High Court in Abuja on April 25, 2017.

Abaribe, who represents Abia South in the red chamber and who was deputy governor to Kalu between May 1999 and March 2003, ran into trouble when the IPOB leader jumped bail the same 2017 and left Nigeria.

See also  WHAT USO ABIA WILL DO In Education

However, the embattled IPOB leader was brought back to Nigeria by security forces in June 2021. He has since been in the custody of the Department of State Services (DSS) and is facing terrorism-related charges preferred against him by the Federal Government before Justice Binta Nyako of the Federal High Court in Abuja.

On October 13, 2022, a Court of Appeal sitting in Abuja acquitted and discharged Kanu from terrorism charges but the Federal Government appealed the decision and the court granted the government’s request to stop the execution of the judgment freeing the IPOB leader.

The case is still in court even as political solution mulled by apex Igbo socio-cultural organisation, Ohanaeze Ndigbo Worldwide, has not achieved any result.