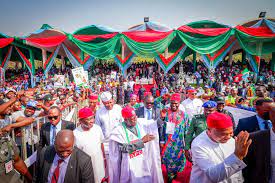 The glaring absence of key members of the All Progressives Congress (APC), in Enugu state at the campaign rally of the party’s  presidential candidate Senator Bola Ahmed Tinubu, held on Wednesday at Okpara Square, Enugu, has been described as a bad omen as the party prepares for the February and March 2023 general elections.

A chieftain of the party who spoke with SummitNews on condition of anonymity stated that the party must put its house in order if it hoped to wrest power from the ruling Peoples Democratic Party (PDP) in the state.

He said that the fragmentation of APC in the state might negatively affect the party’s performance at  the various levels of the elections.

Recall that about 48 hours to the rally some members of the party in the state staged a peaceful protest at the party’s national secretariat, Abuja, alleging that the current state chairman of the party Barrister Ugochukwu Agballah, misappropriated several millions of party funds, and demanded for his sack.

However, not a few said that the presidential campaign rally which was attended by thousands of party loyalists drawn from the 17 local government areas of the state and beyond, was a huge success.

Senator Tinubu who spoke extempore for almost thirty-five minutes promised to resume Eastern corridor locomotive railways, extending it to Calabar, Anambra and other parts of the Eastern parts of Nigeria.

Tinubu also said that since European countries still use coal as sources of power and Energy, he will reinvent coal mining and usage, pledging that he would create industrial hubs in the South-East zone of the country.

He also said that he will develop two sea ports in Port Harcourt, the Rivers state capital,  to accelerate business developments in the Eastern parts of Nigeria, just as he will also encourage agricultural activities if  he becomes the next president of the country.

The former Lagos state governor lampooned former President Olusegun Obasanjo, and former Vice President Atiku Abubakar, both of whom he accused of having squandered Nigeria’s treasury, but are now at loggerheads on who looted the country more than the other.

According to Tinubu: “We have to use what we have, we are still fighting for railway line across the country, to build our deep sea ports, to build our railway lines from Zungeru to Lagos, to Calabar, to Enugu; rail to evacuate our coals to fire our furnaces, to produce electricity and end estimated billing.

“We cannot just export yams and cassava only, we can become agro-processing center; we have 200 million people to feed and we’re not going to starve to death.

“Go and look at Lagos, it’s a state better than some countries. No Igbo man is troubled in Lagos, they have estates in Lagos, they make money there and bring to you down here. If you elect me as president, I will work with you. We can create industrial hub in Enugu, Imo, Ebonyi, Anambra and Abia states; deep sea ports, two in Port Harcourt. Enugu will become a industrial hub

Tinubu had earlier visited Ambassador Bianca Ojukwu at Chukwuemeke Odumegwu-Ojukwu’s Enugu residence, the traditional rulers in Enugu state who converged at the House of Chief in the state House of Assembly and also Governor Ifeanyi Ugwuanyi at Enugu Government House

Speaking earlier, the Coordinator of APC Presidential Campaign in the South-East and Governor of Imo State, Senator Hope Uzodinma, appealed to the electorate to vote for the party’s candidates at all levels, adding that “ I came here to campaign and win elections.”

He said that the time was ripe for Ndigbo to forget their grievances, and join the rest of Nigerians to build a virile, politically and economically stable nation.

Also speaking, Ebonyi state governor David Nweze Umahi, said that APC will sweep the votes in the entire South-East, saying that the electorate will give the party’s presidential candidate 90% of the votes cast on the election day, February 25.

“This is the time to prove that we want the chunk of the meat.  We have to integrate ourselves into politics at the centre.  We’re obedient to Jagagban and to APC,” he said.

Barrister Agballah promised that the party will give Senator Tinubu over 50% of the votes cast at the presidential election, adding that its governorship candidate  Chief Uche Nnaji, will come tops during the election.

Among the APC Chieftains in attendance at the rally included Governors Dave Umahi of Ebonyi and Hope Uzodinma of Imo states. Others were Senator Andy Ubah, Chief Gbazuagu Nweke Gbazuagu, High Chief Ikechi Emenike, Abia state APC guber candidate, and other APC Governorship candidates of the party in south east states among other party members from the zone

See also  Transparency, accountability shall be our watchword if given mandate to govern Rivers State, says Jackrich - From Chukwudi Ejimofor/Port-Harcourt