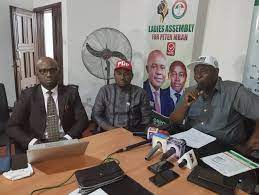 The Enugu State chapter of the Peoples Democratic Party (PDP) has urged the Economic and Financial Crimes Commission (EFCC) to begin investigation into the allegations of fraudulent practices levelled against  Barrister Ugochukwu Agballah, the Enugu State chairman of the All Progressives Congress (APC)

The PDP made the call through the spokesman of the party’s campaign organisation, Barr. Nana Ogbodo at a press briefing in Enugu on Tuesday.

The call on the anti-graft agency came on the heels of the protest by some APC members from the state at the party’s national secretariat at Abuja on Monday.

The aggrieved APC members accused Agballah of embezzling over one billion naira, which had been the main source of disagreements among members of the party since the party’s primary elections ended last year.

But Agballah had in a swift reaction, blamed the protest on the PDP, which it said was sponsoring crisis within the party. He denied embezzling any kobo belonging to the party as, according to him, no money was released to the party by anybody.

The protesting APC members had insisted that Agballah should be made to refund the allegedly embezzled fund from different sources which they listed as follows:

1. Embezzlement of the sum of N283 million provided for the purchase of expression of interest and nomination forms for their party members to make sure that their party fields candidates for all the elective positions in Enugu State, from the Governorship to the National Assembly and State Assembly.

2. Embezzlement of about $1.5 million (approximately over N1 billion), which they said various presidential aspirants gave to the state delegates to the APC national convention and presidential primaries through Chief Ugo Agballah and Chief Uche Nnaji.

3. Syphoning of the funds given to the Enugu State chapter of the party by an APC governor in the South East to help their party prepare for the presidential rally of the party in Enugu on January 11, 2023.

5. They complained about what they saw as illegality in simultaneous occupation of the deputy governorship candidate and State Secretary of the PDP by Chief Robert Ngwu.

In view of the above, the group, in the petition signed by their Leader, Comrade Adolphus Ude; Chairman, Dr. Mike Chukwu; and Secretary, Engr. Vincent Asogwa, asked the national leadership of the APC to:

1. Immediately remove Chief Ugochukwu Agballah as the chairman of the APC in Enugu State and to appoint a Caretaker Chairman to pilot their party through the 2023 general election.

2. Cause Chief Ugochukwu Agballah and Chief Uche Nnaji to immediately make available to the state’s delegates to the national convention and presidential primary election the allowances totalling about $1.5 million (about N1 billion) given to delegates.

3. Compel Chief Ugochukwu Agballah and Chief Uche Nnaji to immediately account for the money meant for the interest and nomination forms.

4. Compel Chief Ugochukwu Agballah and Chief Uche Nnaji to cough out the funds given to the party by an APC governor in the South East to prepare for their presidential rally in Enugu tomorrow.

6. Correct the prevailing anomaly and illegality where Chief Robert Ngwu simultaneously occupies the office of the State Secretary and the position of Deputy Governorship candidate of the Enugu State APC.

However, the Enugu PDP campaign council expressed concern that Agballah decided to blame the crisis in his party on the PDP.

See also  Ayu: How Not to run A Political Party - By Ray Morphy

“Besides, the APC has never been a factor in elections in Enugu State, let alone now that all the key stakeholders of the APC in Enugu have abandoned the party to Ugochukwu Agballah and his godfathers. If the APC was in the ICU before his controversial emergence as the State Chairman, the party has now been effectively embalmed and consigned to the mortuary by the totalitarian, greedy, and corrupt leadership of Agballah and his two godfathers.

“However, we have, as usual been dragged into a purely APC affair by the loquacious Ugcohukwu Agballah, who has claimed that the protesters were sponsored by the PDP. Of course, Agballah’s penchant for looking for scapegoats rather than face his demons is legendary.

“As you are well aware, the crisis rocking the Enugu State APC is protracted and predates the current electioneering season. It is on record that even before yesterday’s protest by their aggrieved members,
the crème de la crème of the APC in Enugu State had petitioned and physically led a protest to the National Chairman and leadership of the party in August 2022, raising about the same issues highlighted by the Concerned Enugu APC Members yesterday and called for Abgalla’s immediate removal from office and appointment of a caretaker chairman.

“In any case, some of the issues raised by the APC protesters are self-evident. For instance, we know as a fact that while George Ogara is paraded as the deputy governorship candidate and while his portrait adorns APC campaign posters and billboards, the name of Robert Ngwu is effectively in INEC records and website as the actual deputy governorship candidate of APC Enugu State. Is that not 419? Is that not fraudulent and obtaining by false pretences?

“We are also surprised that Ugochukwu Agballa is just coming out to deny that no dollars were given to APC national convention delegates through him and his governorship candidate; and that no funds were released to him for any nomination forms. But it is a fact that detailed reports on the funds so released have been trending online since November 2022.

“Needless to waste our time on an attention-seeking rabble rouser, who has turned himself to a clergy without congregation, we wish to:

1. Call on Chief Ugochukwu Agballah to go home and settle with his aggrieved party members and restitute to them whatever he has taken from them. This is not a fight between the PDP and the APC; it is squarely a fight between angry and deprived APC members and a greedy and conceited party leadership.

2. State that it will be interesting to see Agballah go to court as he boasted. That is the civil thing to do. Probably his aggrieved party members will be able to provide details and showcase his nakedness to the world.

3. In any case, if anybody deserves to be sued over this matter, it is Ugochukwu Agballah, who has defamed the Enugu PDP and its governorship candidate by dragging them into a matter that has absolutely nothing to do with them.

4. Finally, we call on the Economic and Financial Crimes Commission (EFCC) to step in to investigate the weighty allegations boldly made by well-known APC party leaders against the duo of Chief Ugo Agballah and Chief Uche Nnaji.”