2023: When Labour Party presidential campaign rally in Enugu turned into a carnival – From Ijeoma Eke-Ojim/Enugu 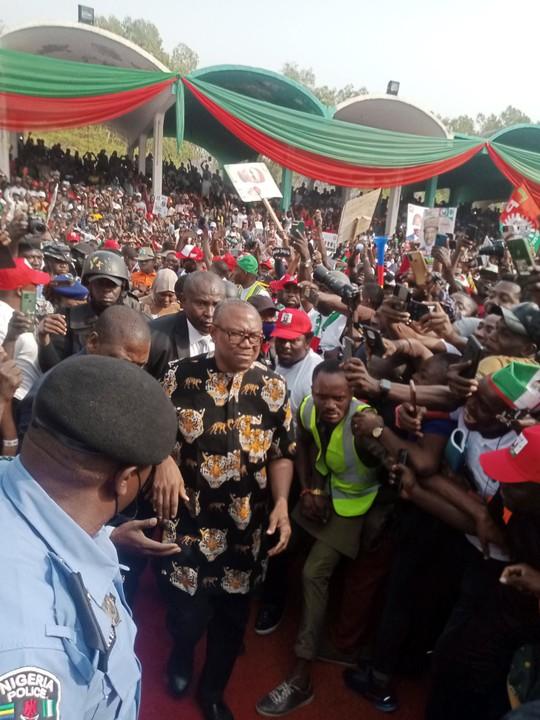 The Presidential Campaign rally of the Labour Party (LP) held at the Okpara Square Enugu, the Enugu state capital, on Thursday, turned out to be a carnival of sorts as several thousands of enthusiastic supporters, especially youths, took to singing and dancing as they waited patiently for several hours for the arrival of the party’s presidential candidate Mr. Peter Obi, and his running mate Senator Datti Baba Ahmed.

Speaking on arrival about 4.30 pm,  Obi said that Nigeria will boom again if he becomes the next president, saying that he is seeking power to secure and unite the country.

Obi  promised that his administration will recruit more personnel in the military and para-military agencies to ensure adequate security of lives and property across the country.

According to him, the Nigerian Police Force (NPF) would play their constitutional role to the satisfaction of all Nigerians, adding that the “police will no longer be your enemy, rather your friends.”

He said:  “We’ll ensure the maintenance of the rule of law, and we’ll also move Nigeria from consumption to production so that people will have jobs.”

He said that his desire was to enthrone a new order that would serve the interest of Nigerians.

Obi, who had earlier visited and addressed students and stakeholders at the Nsukka and Enugu campuses of the University of Nigeria, insisted that the Nigeria that will be the pride of the citizenry was possible with the support of the people

Flanked by his running mate, Ahmed Datti, and his wife Margaret Obi, among others, Obi said: ” We are tired of fake promises. We have more people living in poverty in Nigeria than in India and China combined. We cannot continue this way. We cannot continue with the level of stealing, insecurity, and suffering in the land. I and Datti are prepared to secure and unite Nigeria.

“We will provide security with the police serving with a human face. No more police harassment. We will recruit more people at all levels of security agencies and provide them with insurance to enable them to do their work. We will create jobs and maintain rule of law.

“We will ensure that our people are free to move about and provide the enabling environment for trade and commerce to thrive. Nigeria will boom again”.

Turning to the youths, Obi told them it was their turn to be proud of the country, stressing that they would not have reasons to run away from the country should he be voted to power.

He said he left London since 2006 and had no dual citizenship and would remain in Nigeria to contribute to the development and growth of the country.

Promising to serve with the best of intentions, he said that he was running in the election because he had the requisite knowledge, ability, character and experience to lead, stressing that the job required someone with energy.

Former President-General Ohanaeze, the apex socio-cultural organisation, and a chieftain of the South-South/Middle Belt Forum,  Chief Nnia Nwodo, described Obi’s presidential aspiration as divinely inspired, and urged the electorate, especially the youths to vote massively for the Obi/Datti ticket

Aisha Yusus, human rights activist appealed to the electorate to vote massively for the Obi/Datti presidential ticket. She described Obi as a competent leader, and detribalised Nigerian. She urged the electorate to shun divisive, ethnic and religious politics.