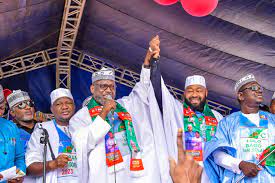 Gov. Bello presents one of the candidates to the mammoth crowd

Governor Abubakar Sani Bello, of Niger State has said that the large turnout of people at the flag-off of the All Progressives Candidates (APC) campaign rally for Zone C candidates in Kontagora is a clear indication that the party will coast home to victory.

Gov. Sani Bello who is seeking for a Senate seat to represent Niger North Senatorial District in 2023 general elections, said that the mammoth crowd signified that they have been accepted by the people and appealed to them to vote massively for all APC candidates at the state and Federal levels.

“I believe the people appreciate the growth and development done in the constituency. So I do not doubt in my mind that they will come out and cast their votes for APC at all levels”, he said.

The Governor assured the people of good representation at all levels.

“We need to assure them that we will do the needful and I believe we have a great team, working together in the best interest of Niger state”‘ he said.

Earlier, in their separate remarks, the National Assembly member representing, Kontagora, Mashegu, Mariga, and Wushishi Federal Constituency,  Abdullahi Idris Garba, who is seeking  re-election, and the APC gubernatorial candidate, Umar Mohammed Bago, enjoined the people to vote for the party, urging their supporters not to engage in violent campaigns, and destruction of campaign materials of other political parties.

They also encoraged voters to collect their Permanent Voter’s Card (PVC) and ensure to vote on election day.

Thousands of people decamped from various political parties to the APC, among  which are PDP Executives and its former State women leader, state women Coordinator of NNPP.

The governor and other candidates of the APC had earlier visited Babban Rami in Mashegu local government area, where they held a rally and enjoined the people to vote for all the Party’s candidates.

They also met with the traditional rulers of Mashegu and sought their blessings, prayers and support.

The District Head of Zugurma, Usman Baiwa on behalf of his colleagues,  commended the prompt response of the Governor on security issues which has brought some relief to their people, but called for more enforcement and prayed for the safe return of those still in captivity.

He assured the governor of their support and loyalty, as he blessed them and wished them victory at the polls.