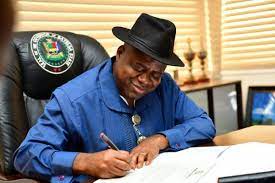 Gov. Douye Diri: What happened to our money

The All Progressives Congress (APC) have vowed to write a petition against Bayelsa Government and Governor Douye Diri to Economic and Financial Crime Commission (EFCC) to explain the spending of N3 billion accrued to each of the eight Local Government Areas of Bayelsa from the withheld 13% derivation fund released to oil producing states.

The party also challenged the governor to explain the spending of over N100 billion accrued to the state from the withheld 13% derivation refunded by the APC-led feferal government.

Chairman of APC in Bayelsa , Dr. Denis Otiotio, stated this on Tuesday while speaking with Journalists at a Correspondents’ Forum of the Federated Correspondents’ Chapel of  the Nigeria Union of Journalists (NUJ) in Yenagoa, the Bayelsa state capital.

He said that Diri administration has brought suffering to the people of Bayelsa, saying that APC is focused on recovering the mandate given to them during the last governorship election but was overturned by the Supreme Court.

“Since there are no officials at the local government councils, how did they manage this N3 billion?

“I hear they are sharing the money to candidates to go and do projects, we are going to write EFCC to investigate that money, the money was given to the local governments,” Otiotio said.

The APC chairman demanded the Bayelsa government should explain to Bayelsa people how they spent the money when there are no officials at the local governments.

He noted that the state government got a whooping N100 billion from that 13 per cent refund from the records available.

“Meanwhile, a month after they got the money, the governor was going to the state Assembly with loan request, why are they collecting loan when they have over a N100 billion from the Federal Government?

“It is unfortunate that even the various transparency briefings they have been holding, they have not deemned it necessary to disclose that they have collected over a N100 billion from the Federation account, that is the money that PDP led federal government then withheld.

“But APC led federal government released them to the PDP states, but the governors unanimously concealed it, if not the revelation by governor Nyesome Wike,” Otiotio said.

“If at the time they did the transparency briefing, they did not inform Bayelsans that Federal Government has released the withheld money, but six months after, they came out because there was a revelation.

“We can see that Governor Douye Diri administration has brought suffering to the people of Bayelsa state, our resources have been mismanaged.

“The people could not enjoy the dividend of democracy, the essence of governance is to create enabling environment for business to thrive,” he said.

Diri, had stated recently, that the 13% oil derivation funds accruing to the state were being prudently spent, mostly on infrastructure development.

The governor in a statement by his Chief Press Secretary, Mr Daniel Alabrah, insisted that the administration had nothing to hide and that the state’s monthly allocations from the Federation Account had always been made public through its monthly transparency briefings.