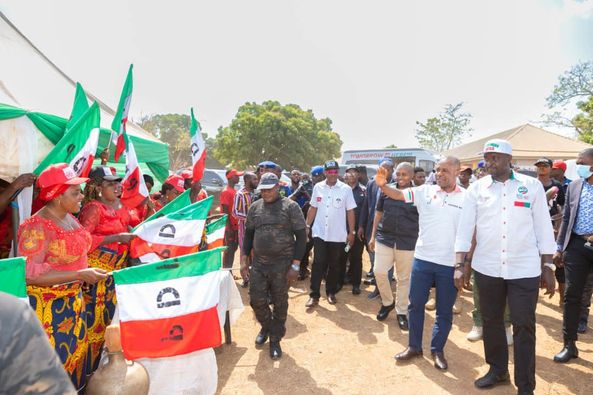 The Senator representing Enugu North Senatorial District of Enugu State in the upper legislative chamber of the National Assembly, Senator Chukwuka Utazi, has assured the Peoples Democratic Party, PDP, and its governorship flagbearer, Dr. Peter  Ndubuisi Mbah, of his people’s support in the forthcoming general elections, saying they will queue behind the party at the polls.

The ranking senator gave this assurance on Wednesday at Ukpabi-Nimbo and Adani, headquarters of Igbo-Ano and Ogboli development centers, respectively, at the town-hall meetings organised by the gubernatorial candidate to extract their priority needs as part of his vision for the state.

Senator Utazi, while commending the party for the choice of Dr. Mbah at a time when the country is facing existential threats from socio-economic challenges, said God had answered the people’s prayer by sending a Daniel that’ll rescue the state.

Describing the Uzo Uwani people as fully PDP members, the lawmaker expressed confidence that the ruling party will sweep the local government area with wide margin of victory even as he called on the guber candidate to carry his people along in his administration through massive investments in the agrarian area.

He further called for the engagement of the youths in revenue yielding opportunities that will address unemployment, youth restlessness and injustice.

While commending Governor Ifeanyi Ugwuanyi, for attracting infrastructure in the area, the people appealed to the governorship hopeful to tackle insecurity, and complete the Edem-Irodo-Ezikolo-Aji road which links different communities to their farmlands. They equally requested for the construction and equipment of vocational training and skills acquisition centres for their teeming youths and women.

Extolling the people-centered manifesto presented by Dr. Mbah, the development centres stated that they were comfortable to remain in the PDP, saying his development plans will bring succour to them.

On their part, a former chairman of the council area, Hon. James Ademu who spoke for the Igala speaking-communities, Sir Vitalis Okonkwo, who represented the people of Ojo, and Hon. Mathew Idu, the Commissioner for Agriculture, described themselves as party loyalists who had already settled for Dr. Mbah’s candidacy.

Expressing their readiness to key into the governorship candidate’s development plans in agriculture, infrastructure and empowerment programmes, the people prayed that the road leading from Uzo Uwani to Kogi State should be constructed to expand their market base.

Responding to the overwhelming support and demands from the people, Dr. Mbah lauded the development centres for the impressive turnout, and for appreciating the value of continuity of the ruling party which has brought improvement in infrastructures and robust development in the state.

Dr. Mbah, who said the large arable lands in the zone will make the area an epicenter of development in the drive to achieving his administration’s plans, assured that he would partner with the people to create massive employment opportunities for them.

He stressed that the federal revenue allocations were decreasing by the day which required alternative strategic model by looking inwards and doing things radically differently.

Disclosing that part of his plans is to take a bold step to migrate the state’s economy to a global digital economy that will reposition state, create jobs, eradicate poverty, Mbah added that technology will be the driving force of his government.

Agriculture, he stated, will contribute at least, 30% to the state’s Gross Domestic Product (GDP) saying it will transform from manual and subsistence farming to mechanized farming.

According to him, due to the abundant resources in the area, Uzo Uwani will be designated a special economic zone, with agro-allied processing industries where there’ll production, processing, packaging and exporting of local produce, insisting the gesture will address unemployment and insecurity.

He further promised to engage the youths in productive assets, make the state the food basket of the nation, build a world class rice mill, enable exponential growth and unprecedented development by attending to all the challenges they presented.